It took months longer than I planned, but I finally did it. I finished the Custodian class battleship for my Tau fleet, the Zelbinion. 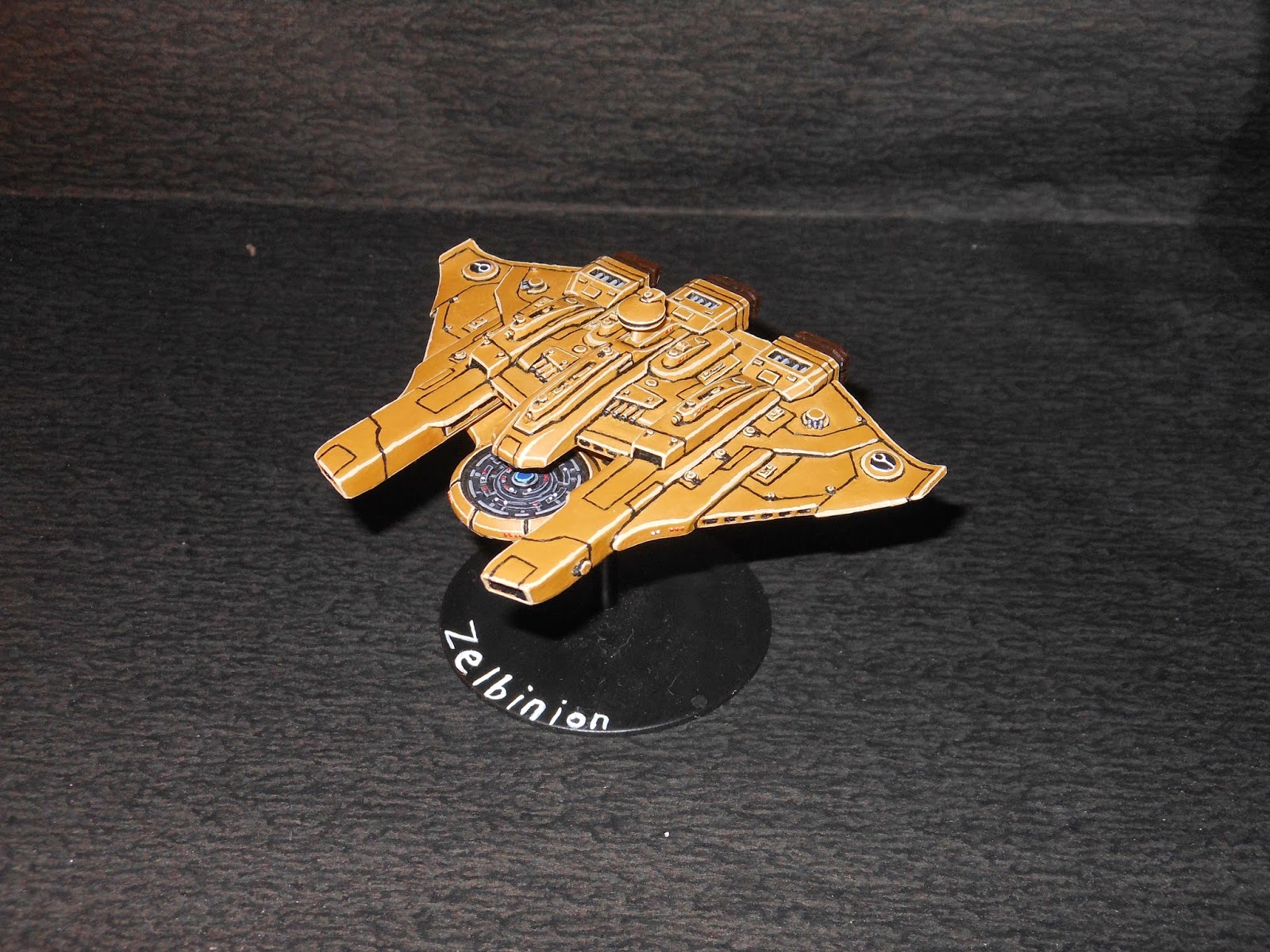 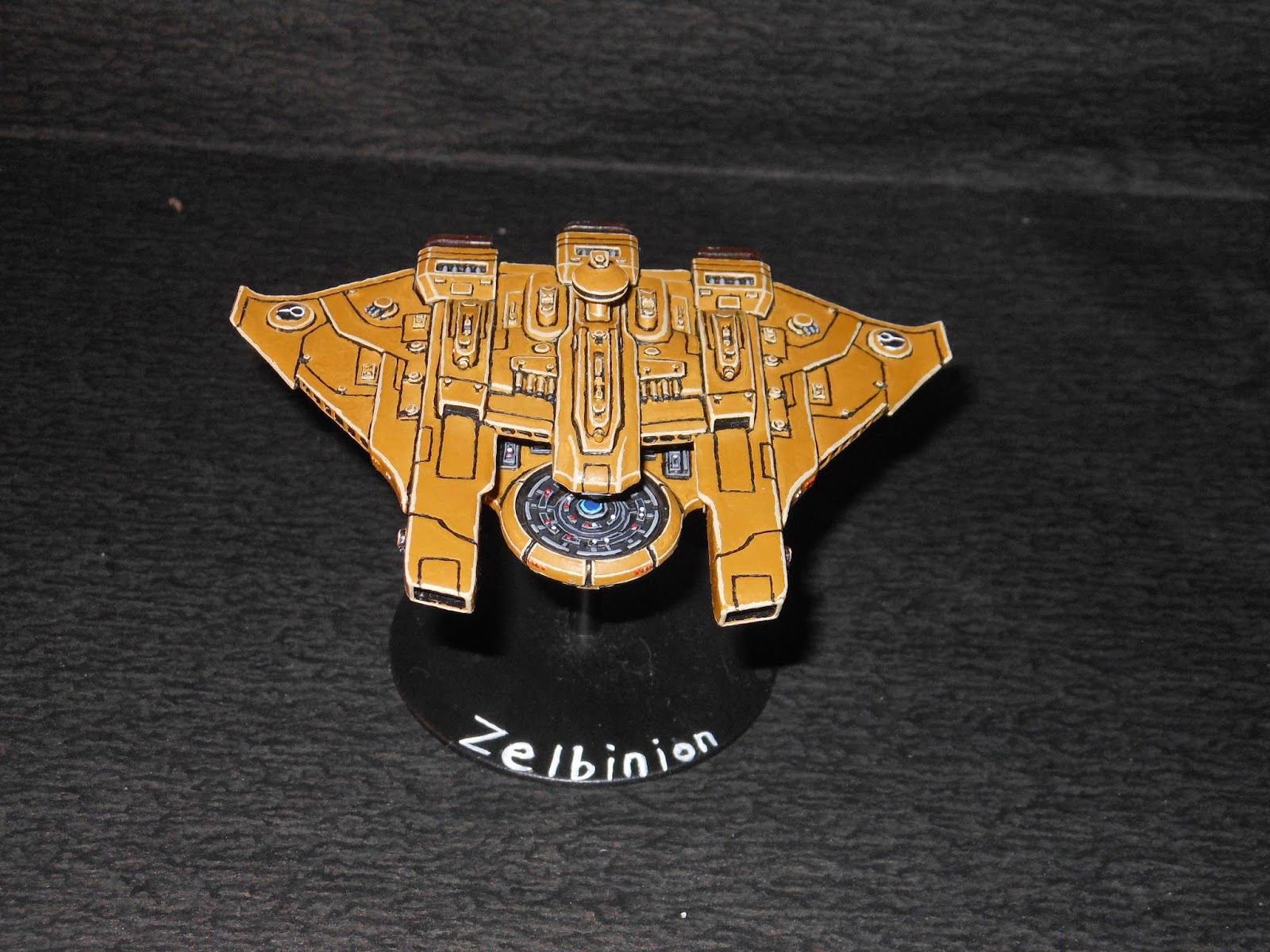 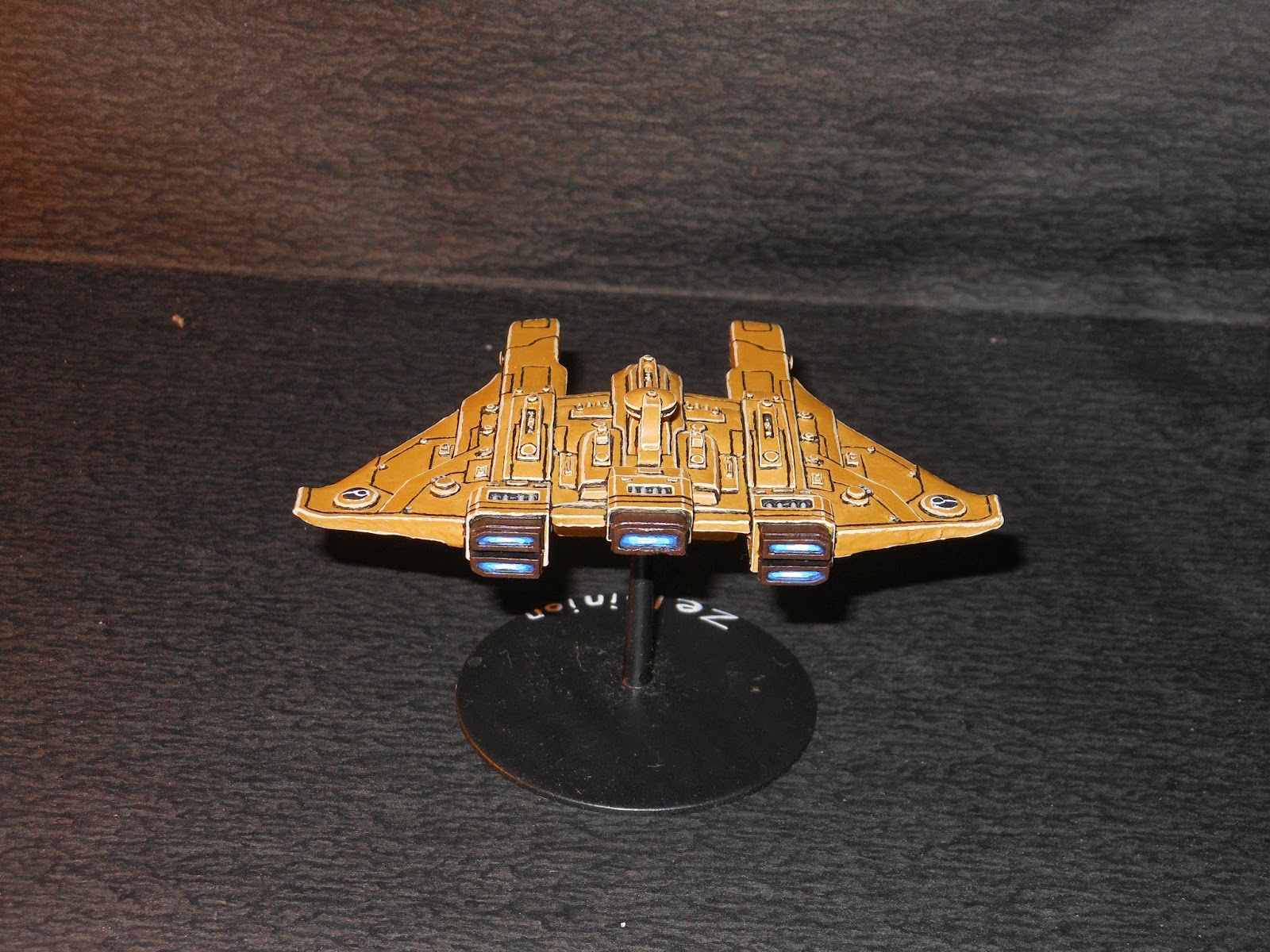 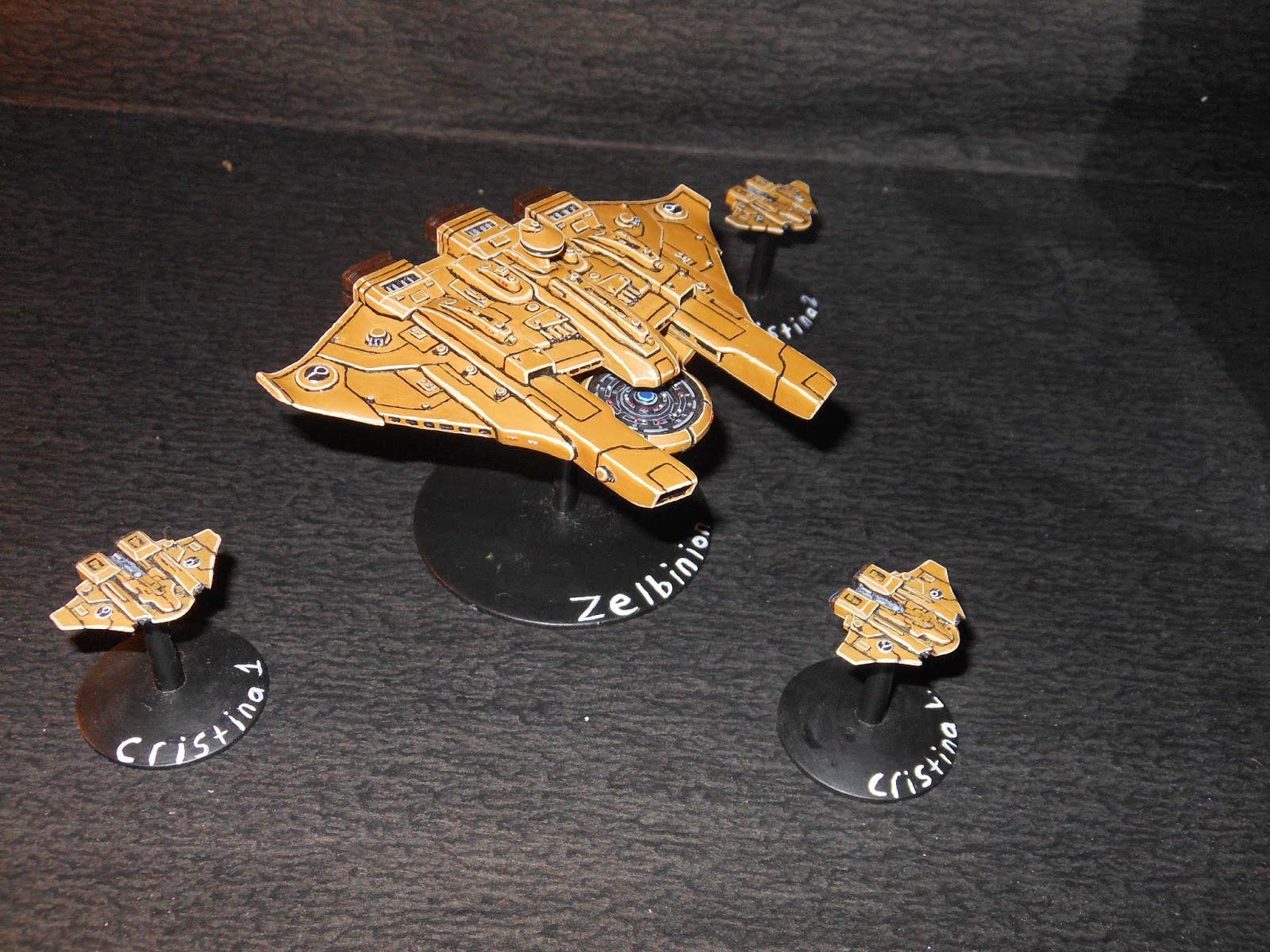 This model was utter hell to paint. I used the last of my ancient cache of Tausept Ochre paint for it, to save costs on a whole new pot of paint and to tie it in with the other Kor'O'vesh ships in my fleet. After painting the Emissaries I was sure that it would take only a few weeks, getting the right coverage of colour with just two coats, three at most.


I was wrong. So very wrong.


The paint was on its last days, and so refused to dry evenly, either producing ugly splotches of discolouration or even uglier 'blisters' of solid paint, and for the next few months I went through a gruelling process of applying and re-applying an endless cycle of see-sawing coats and touch-ups that I can only describe as the painting equivalent to trench warfare. It was horrifically demoralizing, as I poured in countless hours of work while never feeling I was making any real progress on it. Eventually though I got it looking.... presentable at least, the highlights went on and now I feel like it was all worth it in the end. I'm particularly pleased with the engine-glows, my neatest yet.

In a clever bit of conversion work, I also pinned the keel section to the main hull rather than gluing it down, allowing for the two pieces to be separated. 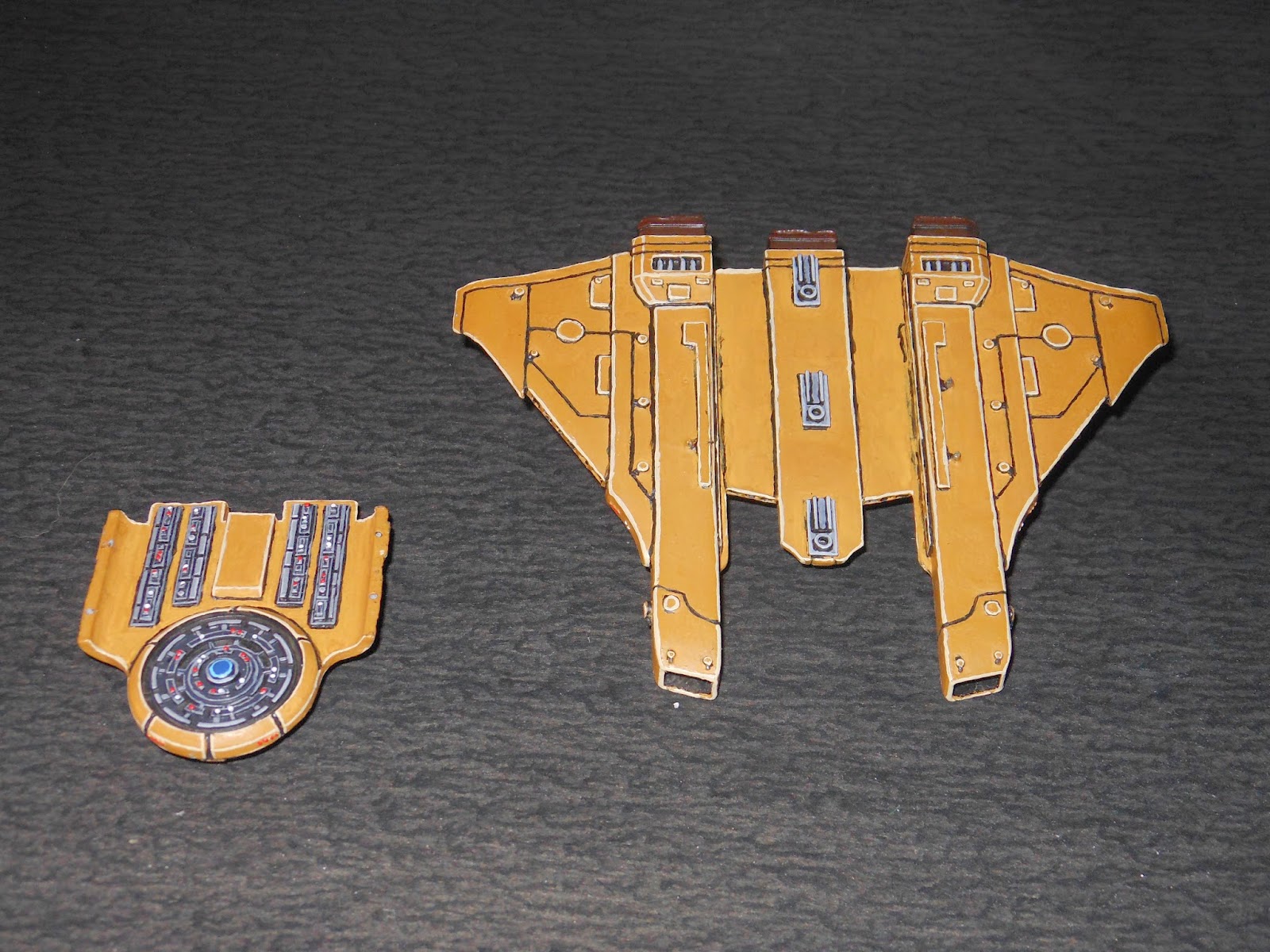 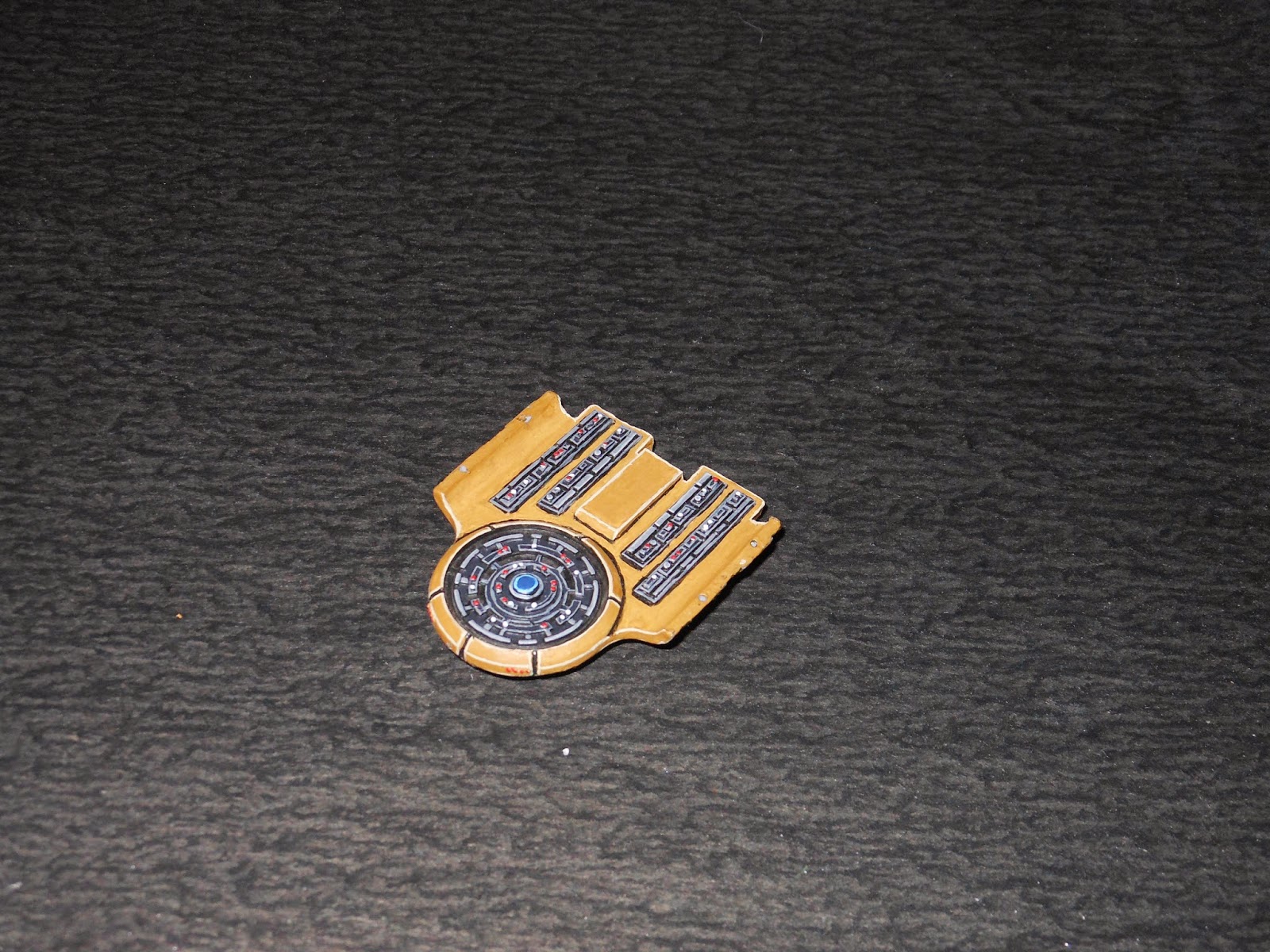 No backstory this time folks. Ordinarily I would, since my Battlefleet Gothic background isn't on hold at the moment, but I simply haven't had enough time to write any between university work and actually painting this thing. Next time there probably will be though.

What there is, however, is some of my latest acquisitions. With the latest disturbing rumours about the imminent demise of Warhammer Fantasy, I went and got myself a castle like I always wanted. Now, I have a modest force of Bretonnians (that I also always wanted) to live in it. 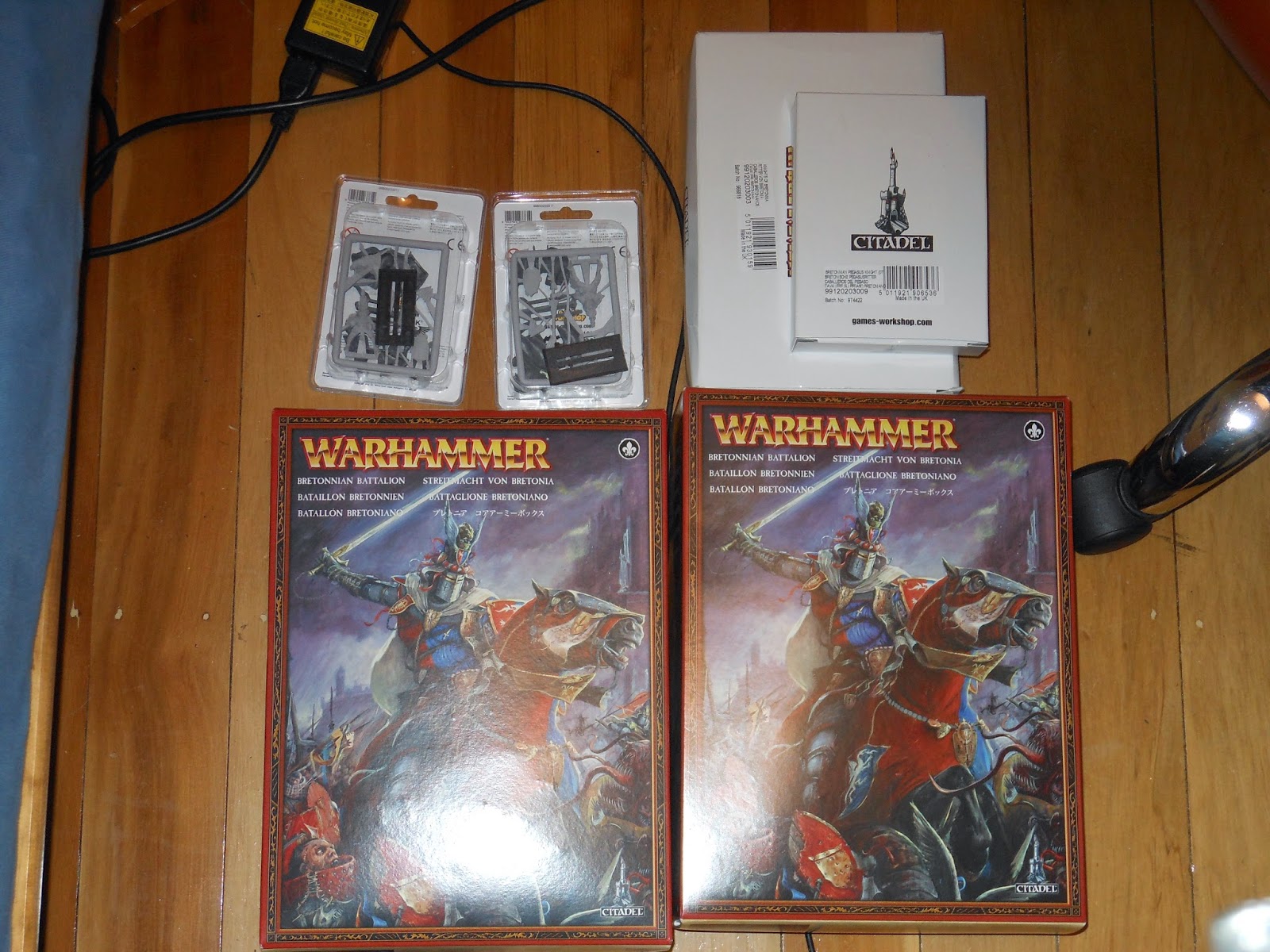 All-up, that is 24 Knights, 40 Men-at-arms, 4 Peasant Bowmen, 3 Pegasus Knights and two characters, to go along with the small handful of Bretonnian characters I already had. It isn't much, it's somewhat plain and certainly a far cry from the vast army of them I originally envisioned, but it has all the essentials of a small force and is definitely better than nothing.

I also picked up a Vampire on foot, another model I always quite liked. 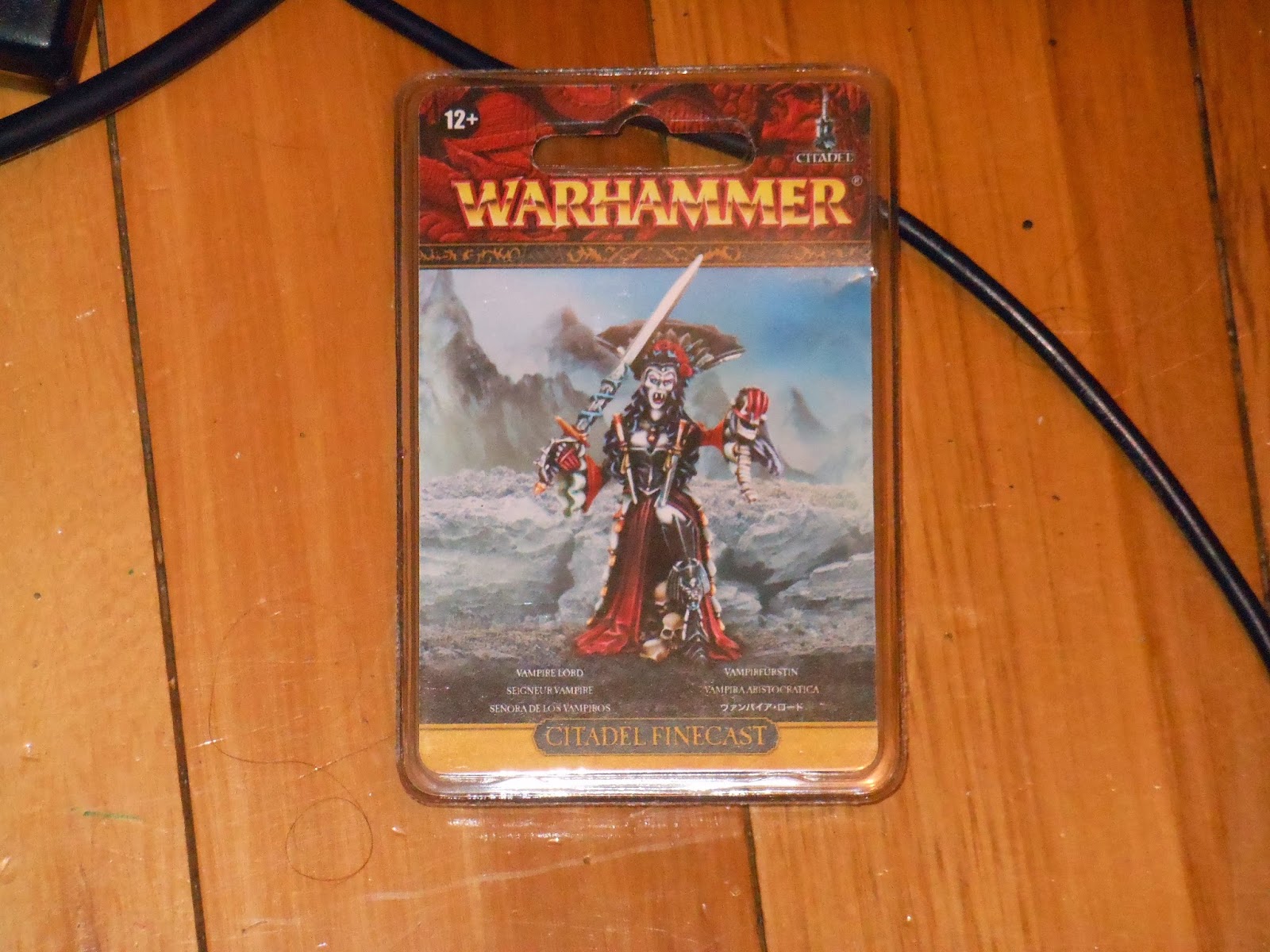 I had intended to get a full Vampire Counts army one day, but I simply don't have the resources for it, so it seems I will have to settle for just one character for it.

Perhaps the most astonishing new arrival, however, is this. 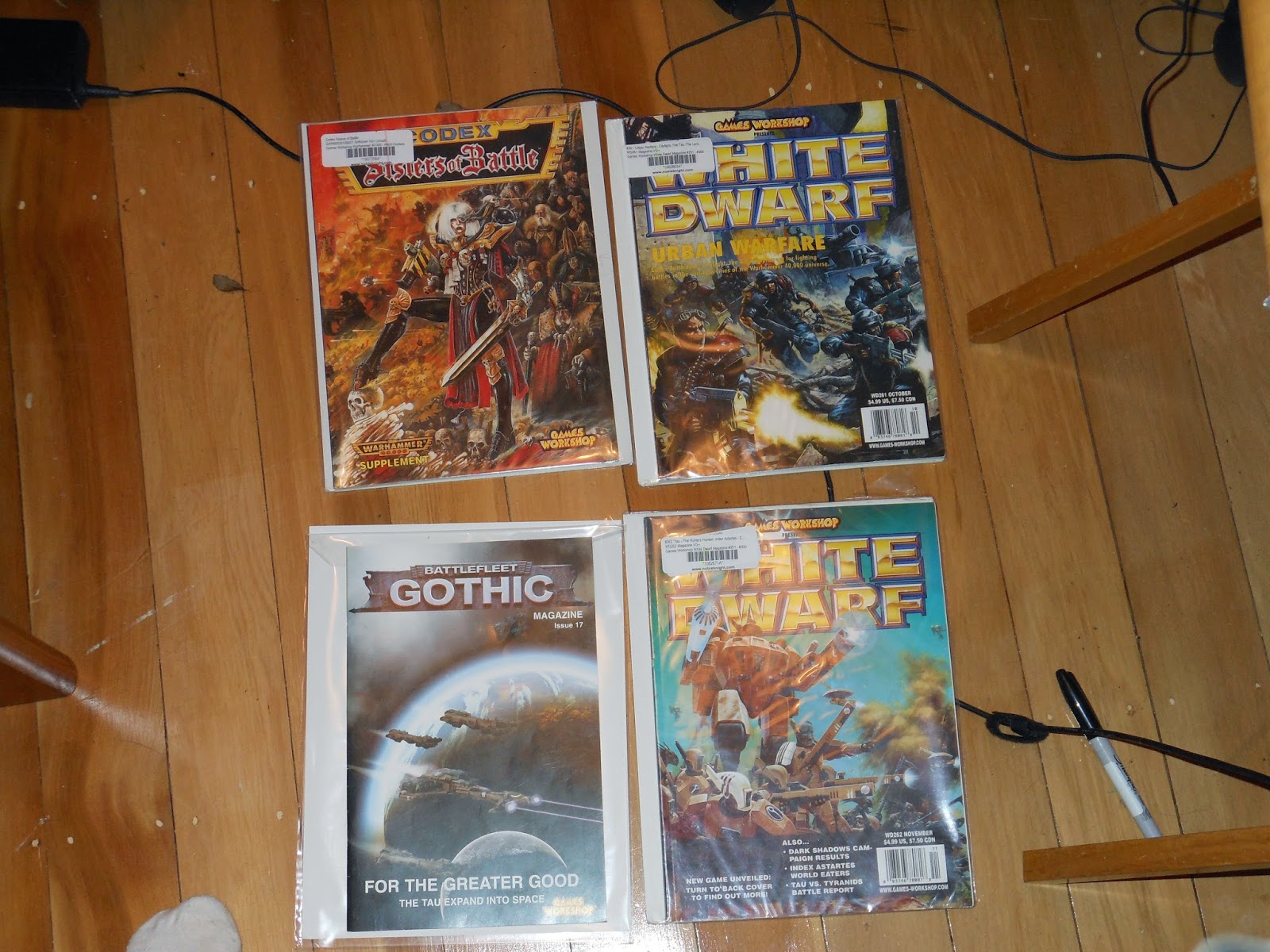 It's an order of old GW publications I got from Noble Knight Games. The rules mechanics in them might not be entirely up to date, but they still have plenty of fantastic background and hobby material in them, and they are all real treasures to have. 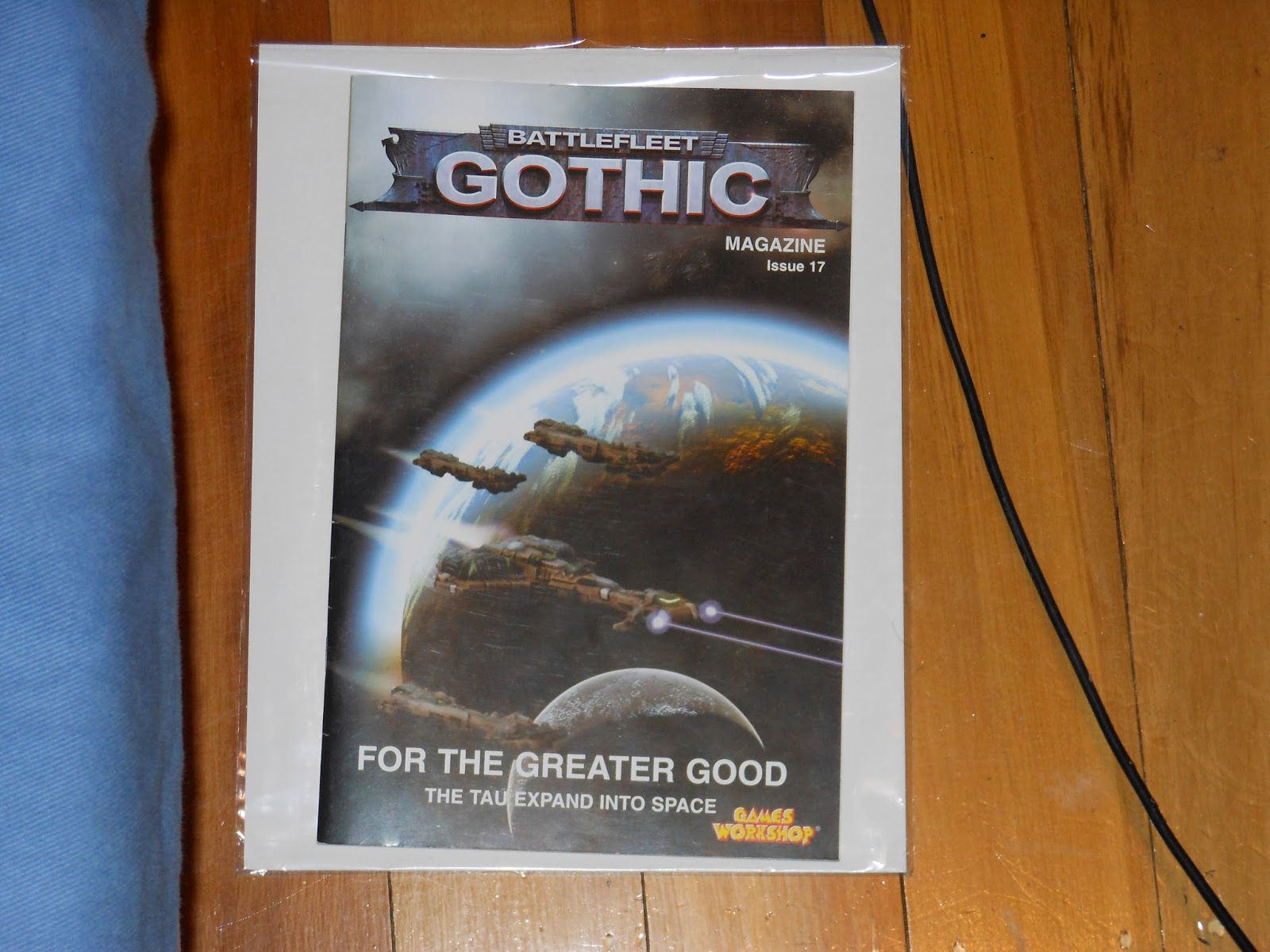 Battlefleet Gothic Magazine issue 17 was my top priority with the order - being a giant enthusiast of Battlefleet Gothic and with the Tau being my favourite faction of both Battlefleet Gothic and Warhammer 40,000 it was a must-have for me. I was actually surprised by how small it was in size and length, I was anticipating something like an old White Dwarf magazine, but as it turns out it's not much bigger or longer than the new weekly White Dwarf. Even so it still has a fair amount of content in it, including assembly guides for the Kor'vattra Tau ships (which would have been really useful if I had had them at the time I assembled my Kor'vattra Tau ships!! grumblegrumblemuttermutter) and rules for extra celestial phenomena, including black holes, useful since there's mention of them in my Battlefleet Gothic background. 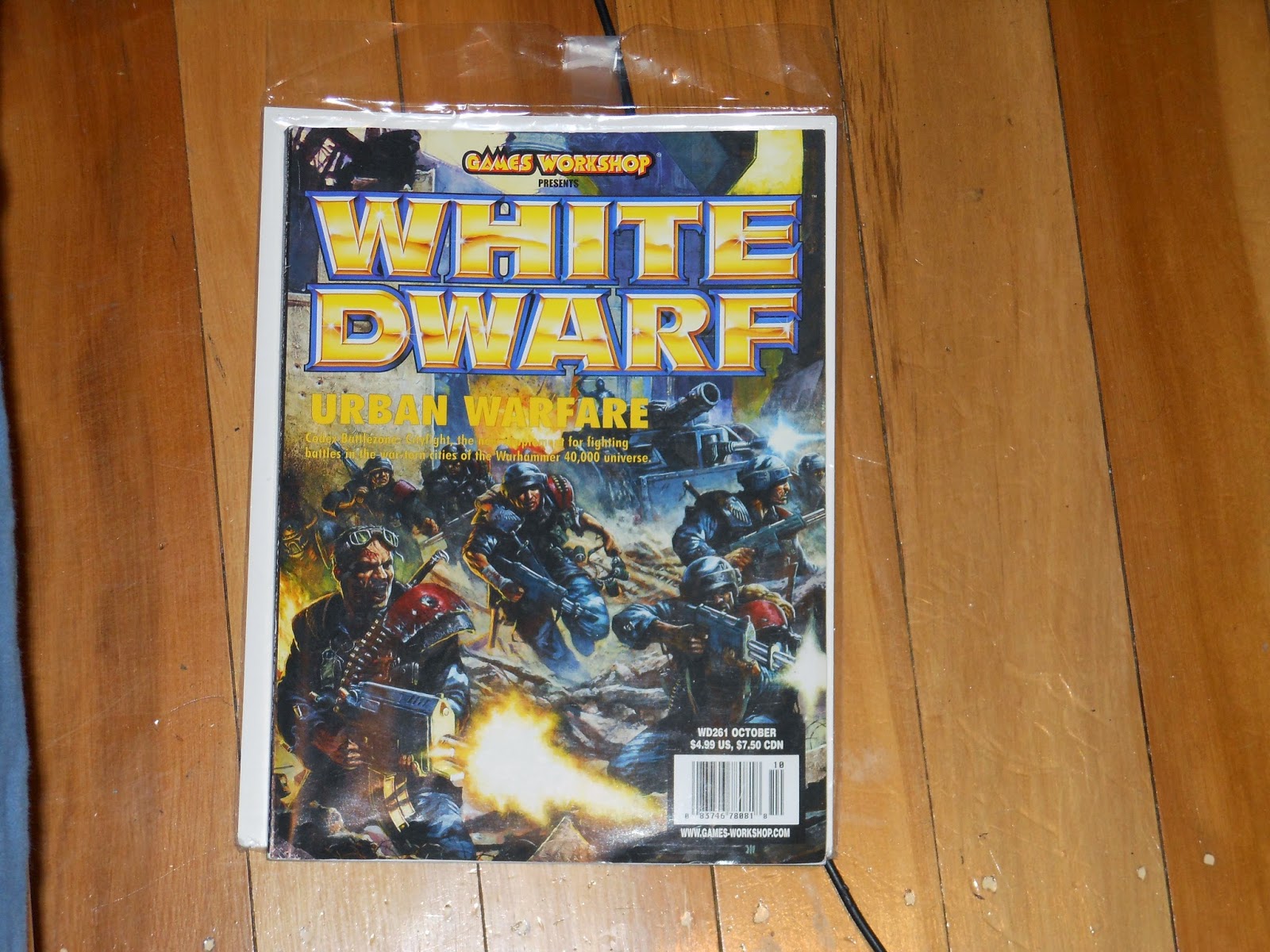 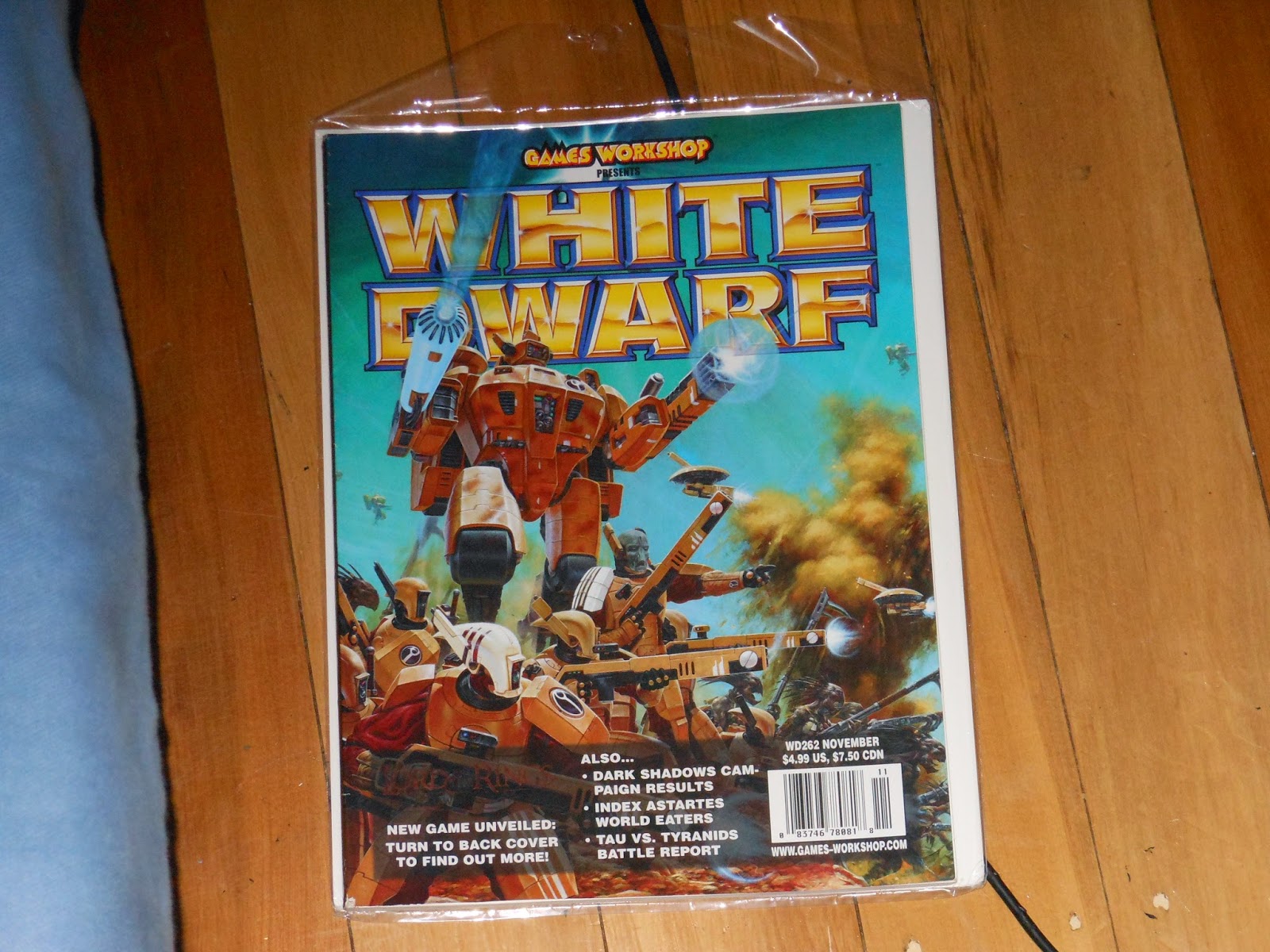 The two White Dwarfs, 261 and 262 (US), October and November 2001, represent a particularly historical landmark to me as they were the main two White Dwarfs to cover the first ever release of the Tau, which like I say is my favourite faction of Warhammer 40,000. I always knew that White Dwarf had gradually featured less and less content over time but my god was I surprised to find out just how much used to be packed into them! I thought the first few White Dwarfs I got from around 2005-2007ish had a lot of stuff in them, but these two feel like they have almost twice as much stuff in them. It took me the better part of a week to work my way through both of them, and even then I ended up staying up until 4:30 in the morning to finish off the second one. They really do have a bit of that old early-2000s era GW magic in them, and it was great fun reading through them.

The final one is a copy of the original Codex: Sisters of Battle published towards the end of 2nd edition Warhammer 40,000. My Ecclesiarchal agents discovered it when I went to order my copy of Codex: Witchhunters and my holy conclave of ministers quickly concluded that I had to have it. I noticed that the three other publications were much cheaper than anticipated so I figured now was as good a time as any to snatch up a copy. 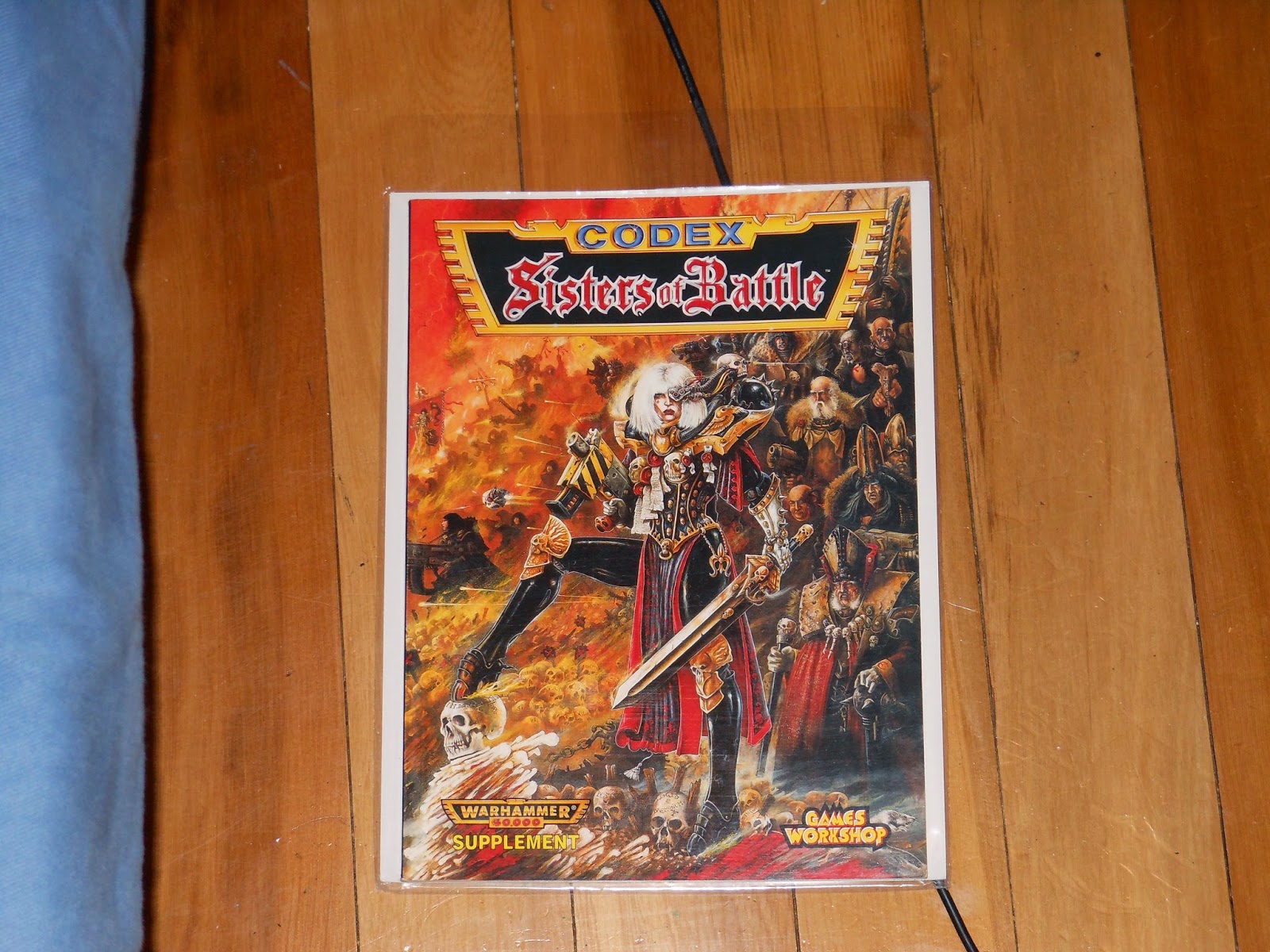 According to the publication date inside, this book was written when I was just 3 years old.


Once again it was a lot smaller than I thought it would be. After hearing legends about how the 2nd edition codexes contained vast amounts of background and hobby material, I was expecting it to be a massive, hulking tome of information but in truth it isn't much bigger than either of the 3rd edition codexes I have, or the 4th edition one I have for that matter, and contains only slightly more background (and less hobby material). I still consider it worth getting though, since a lot of the background inside isn't repeated in Codex: Witchhunters. Some of the old rules were fascinating to see too (vehicles seem like they were absolute death-traps in 2nd edition!).

That about covers everything I think. Now back to my eternal tasks of painting and background writing (and university assignments)....
Posted by MillitantGuerillaCommunistHippie at 03:10