Good god has it really been that long since I've posted here? I could have sworn there had been something after the Custodian.

Oh well. I'm back now, after finally finishing the third (out of a planned four) Glade Guard regiment for my Wood Elves, The Spirit of Spring. 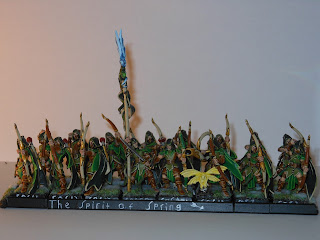 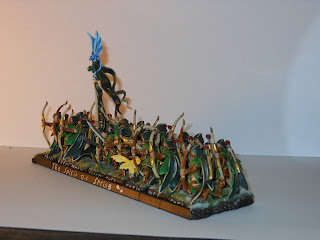 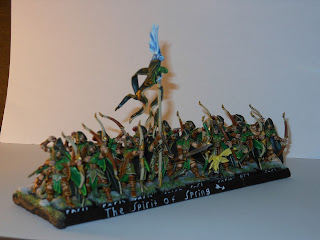 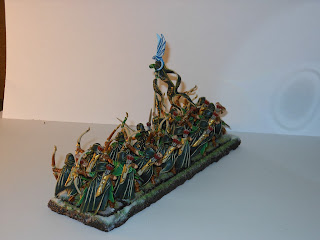 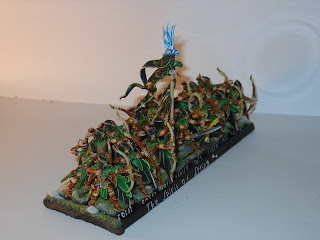 This unit had a troubled development. I actually started on it about mid-way through last year, but then had to put it on hold along with every other part of my life not related to assignment writing in order to cop with the unending onslaught of university work that happened in the last semester (fortunately, I will never have to worry about that again). Then just as it was finally getting finished, a freak accident occurred that resulted in yet more delays.

In the end though I think it turned out ok. It would seem that I've lost my touch with mixing colours however - I tried to recreate the same light blues and yellows that I used for the spites on the Treeman Ancient, but couldn't get quite the same shades. Not that it matters too much, I still like how they turned out, especially the blue one. If I could change one thing I would probably make the basecoat and first layer on the yellow spite a little bit darker (especially the basecoat), since it's kind of hard to distinguish the detail on it as is.

Really though the only fault I have is the basing on the movement tray, which has a few 'accidents' on it caused by the particularly thin PVA glue used to stick basing materials on spilling over the sides (and taking the aforementioned basing materials with it). Looking at the pictures though it doesn't seem too noticeable.

But all wars have casualties, and alas, I must end this post on a sad note, with the loss of an unsung hero that was dearly loved and is sorely missed. 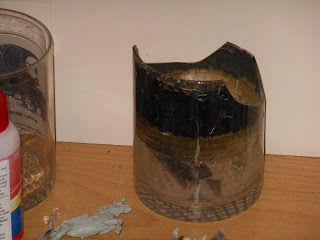 My trusty paint-water glass, which has faithfully cleaned my paint brushes ever since I first started this hobby over 13 years ago when I was 8 years old. It's been with me every step of my tabletop journey, and a lot of other events, and was an iconic symbol of my hobby roots and childhood. I close my eyes, The lantern dies, The scent of awakening, Wild honey and dew...

The freak accident I mentioned above was said glass falling onto the floor and breaking (and scattering dirty paint-water everywhere in the process, though the effects seem to have been negligible), which left me out of action painting-wise until I could find a replacement, which I eventually did. It still isn't just quite the same though...

That will be it for now. There still isn't any new Fantasy background at the moment, since I'm still assessing how much demand there would be for it (as it doesn't comply with GW official background anymore). Seeing more and more people looking towards past-hammer and being dissatisfied with GW's recent background material is making me lean more and more towards 'yes' however.
Posted by MillitantGuerillaCommunistHippie at 00:02 No comments: