The Zephyr through the Leaves

So while I'm agonising over whether or not to base my next Glade Guard regiment in snow or not (so far I'm leaning towards yes), I finished the movement tray for my Glade Riders, The Zephyr through the Leaves. 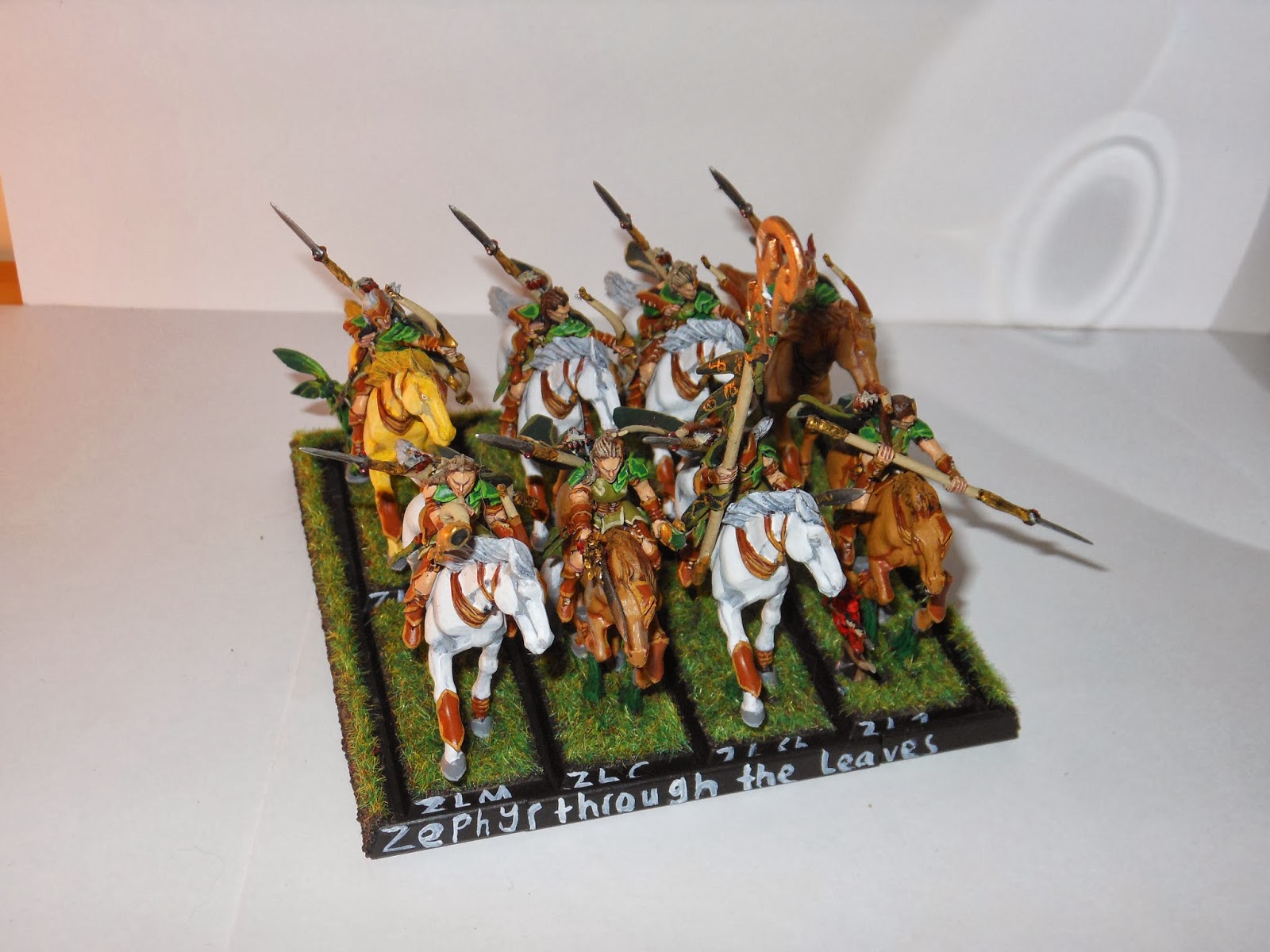 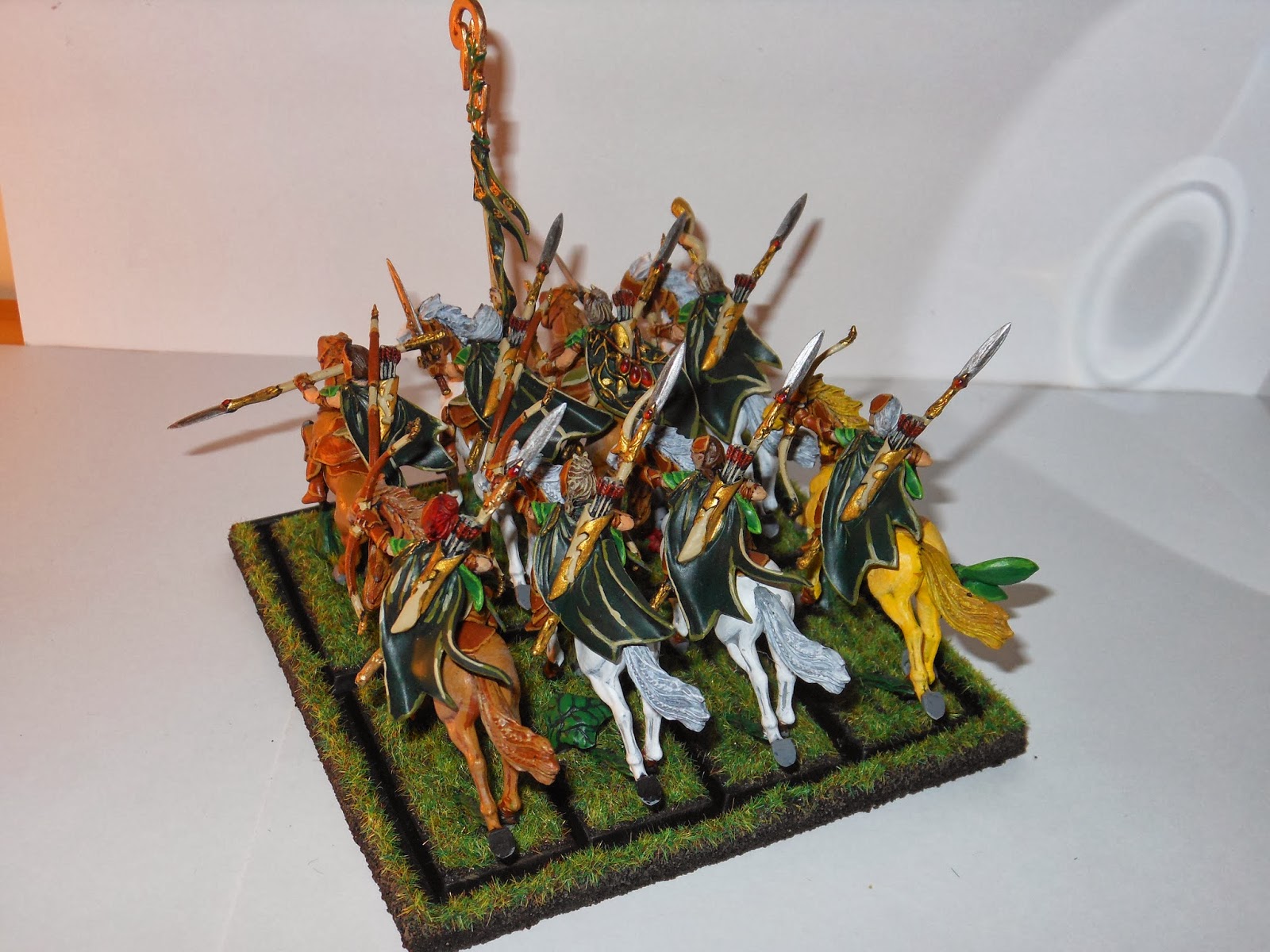 And the background for them that I wrote. If you're coming here from Asrai.org, you'll have probably already red it, but otherwise here it is.

Glade Riders are a rare thing in the Meadows of Heaven. Contrary to what it's name might suggests, the territory in fact contains very few meadow areas and even fewer stable glades, and the armies of the Meadows of Heaven have historically placed little need on cavalry, instead preferring larger numbers of infantry to better move through Woodland unrestricted, an outlook that has lasted to the present day. What roles fast-moving cavalry normally fulfil are mostly performed by Warhawk Riders instead in the Meadows of Heaven. Nonetheless, there exist a few small Kinbands within the Meadows of Heaven, and they are equipped as well as any Glade Guard unit, though their equipment is generally focused more around speed. Their Lorenweave cloacks, for example, have slightly smaller and lighter cuts, and they wield lighter scout longbows rather than the heavier glade guard longbows.

The combat daggers are of the same design as those used by the Glade Guard however, and the Glade Rider kinbands also share the tradition of giving the unit champion, a Horesmaster in this case, two such combat daggers. Like their Trusted Bowman compatriots, Horsemasters ride to battle with their cloaks adorned with golden vines symbolic of the wealth and power of the Meadows of Heaven, and a trio of rubies of command, a sign of military rank, with rubies being considered to be the most warlike of gems by the Asrai of the Meadows of Heaven. Each Glade Rider is also armed with a long elegant spear, used in both battle and hunting, and it is this rather than the longbow that is hand-crafted by each Glade Rider.

And finally here's a group shot of my entire completed Wood Elf army so far. 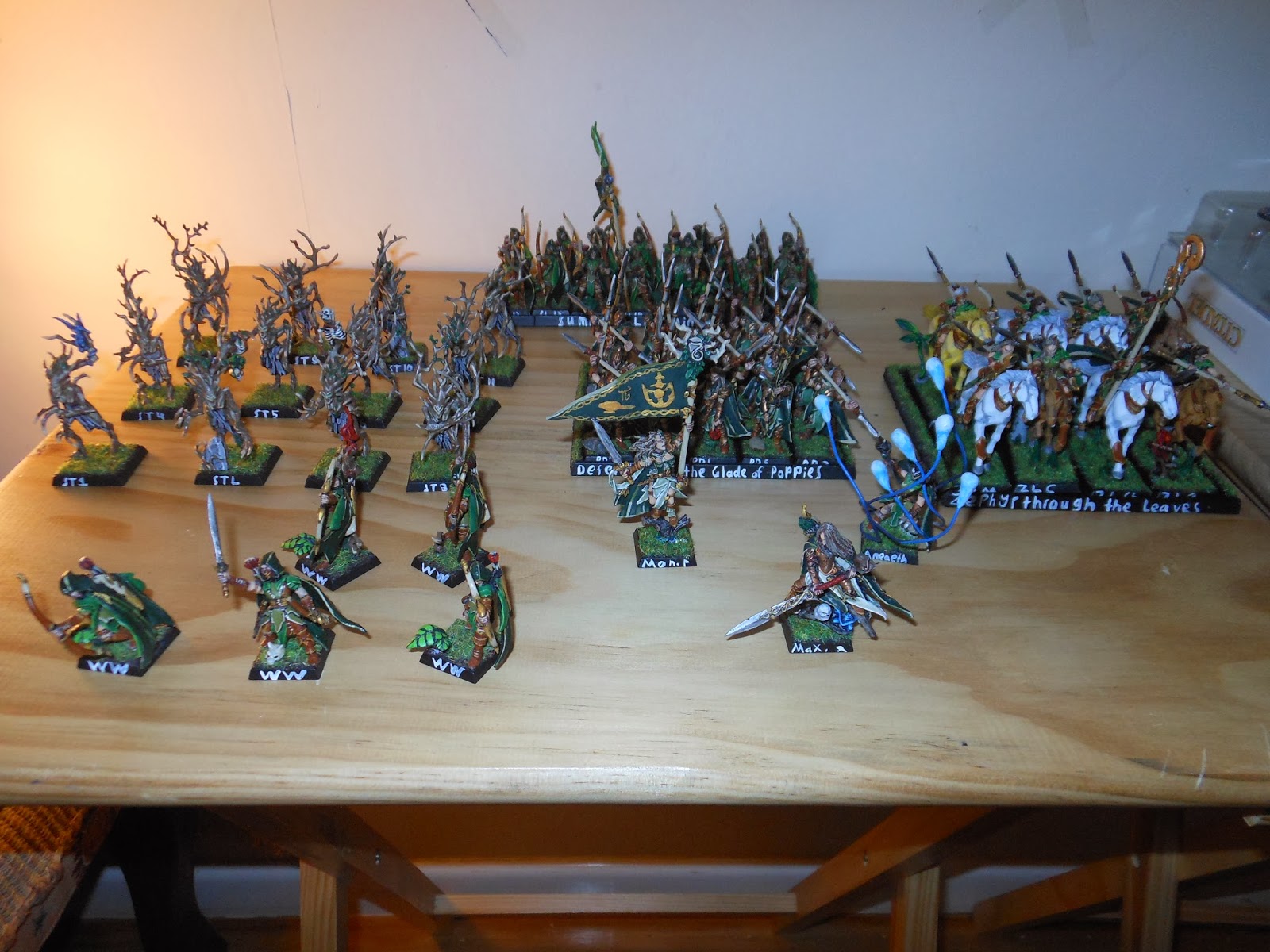 From back-to-front, left to right: Summer Lightning (Glade Guard), Scaretale (Dryads), the Defenders of the Glade of Poppies (Eternal Guard), The Zephyr through the Leaves (Glade Riders), the Wood Wasps (Scouts), Moni'qeth (the army standard bearer), Aneaeth Ollissin (the Spellweaver), Maxamaron (the Wishmaster of the Meadows of Heaven, and the army general, a Highborn).

Now back to the Glade Guard...

Ahh, at last I'm back in an area with wifi! Oh how I've missed the internet.

So I've been away house-sitting for the last couple of weeks, but over this time many things have happened on the hobby front. First of all two of my three orders arrived.

The first (which was the second I picked up due to being processed later) is the first troupe of Wardancers for my fledgling Wood Elf army for Warhammer (fantasy). 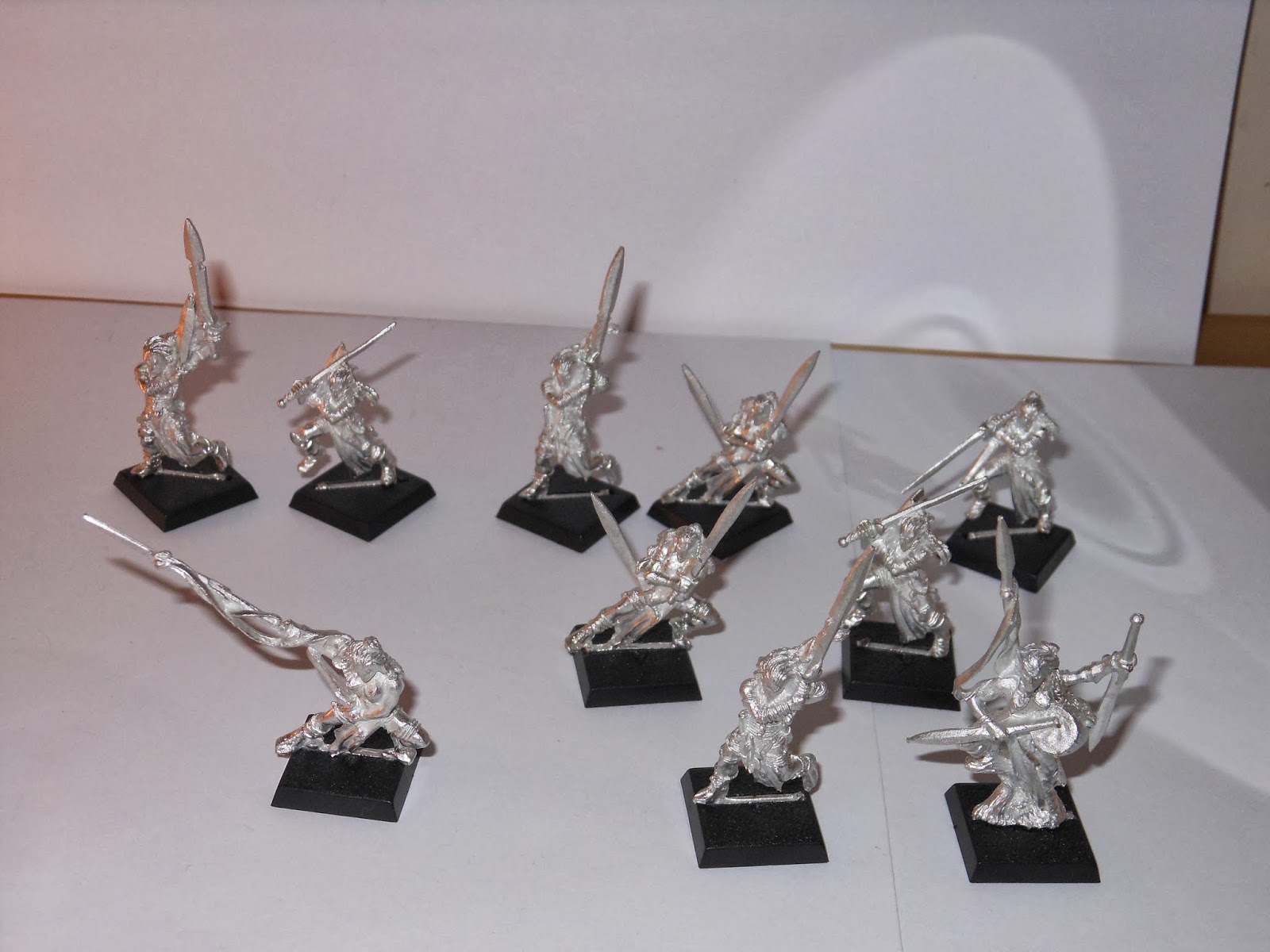 Wonderful miniatures, I couldn't be happier with them, especially since in a remarkable coincidence I seem to have gotten every single one depicted in the pictures on GW's website. More diagonally-slotted bases would have been nice though.

Then came the second shipment. Due to a processing quirk, I actually ended up getting it before the Wardancers, as well as two days earlier than I anticipated, but I ordered it second so I consider it the second one.

In it was a pair of Wood Elf nobles, to help with all the tedious administrative work involved in ruling a vast woodland empire (and because I love the models). 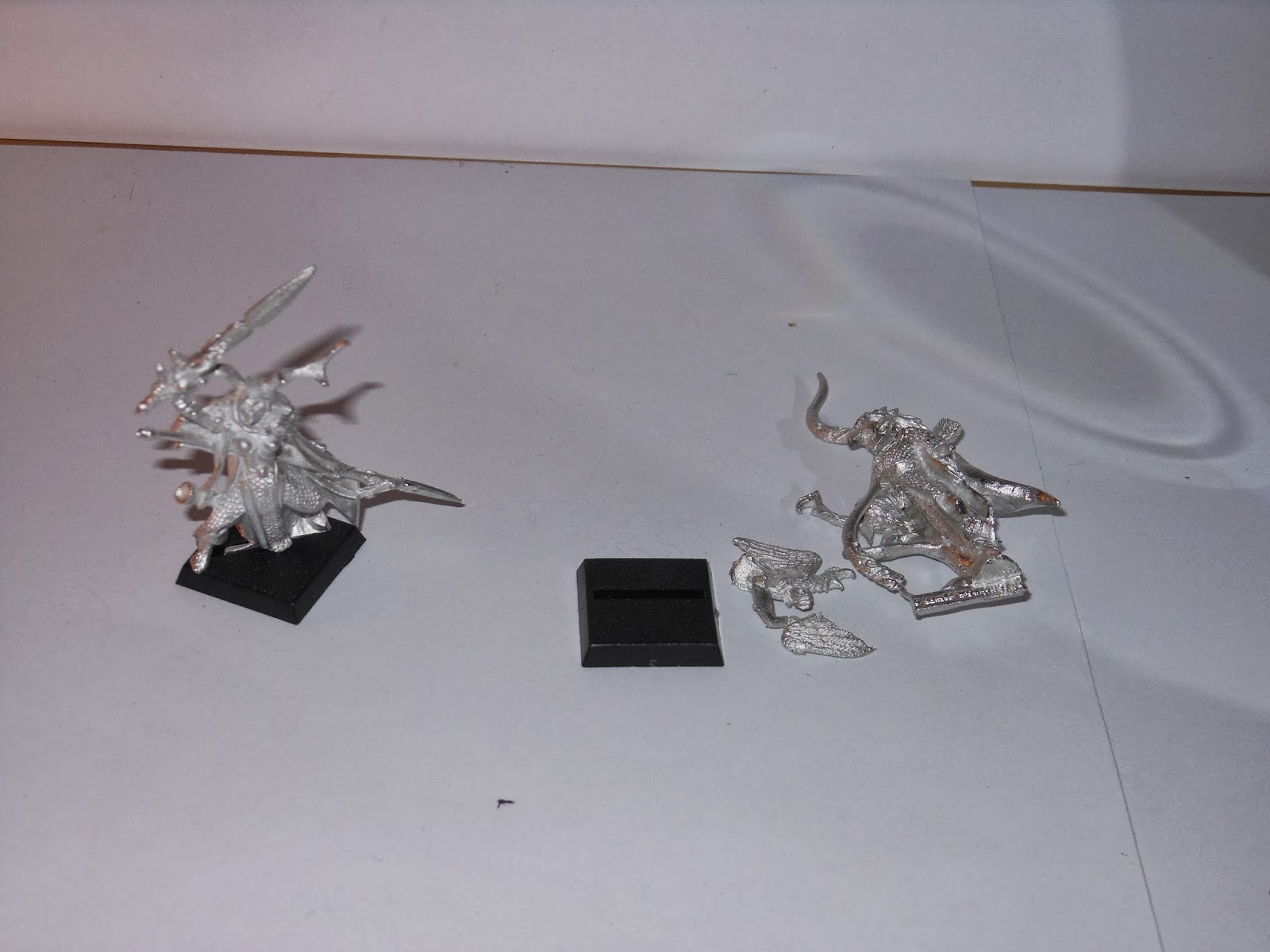 As well as something truly special, one of my all time favourite Warhammer models and my own personal Christmas gift to myself - Naestra and Arahan, the Sisters of Twilight on their faithful Forrest Dragon. 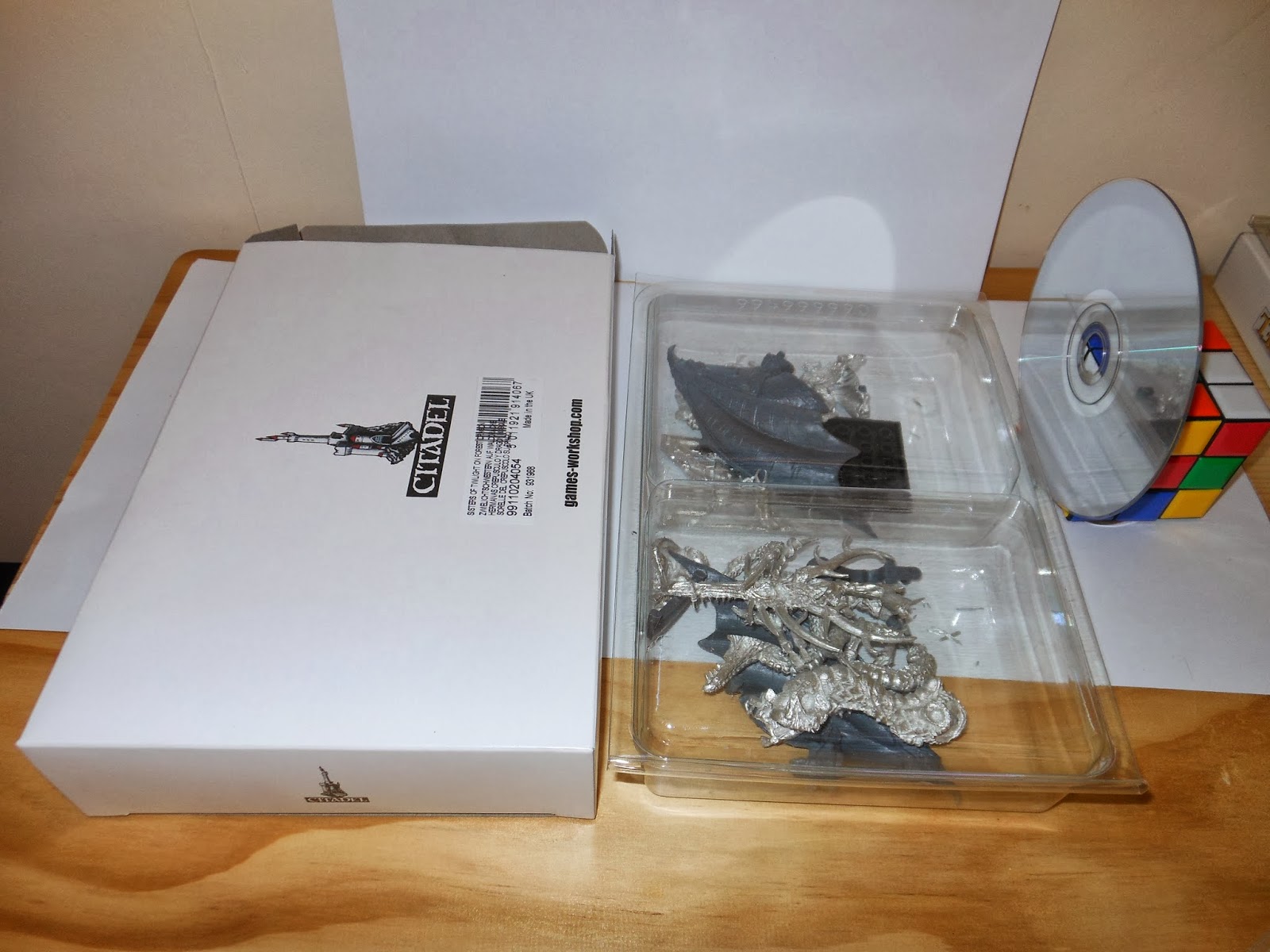 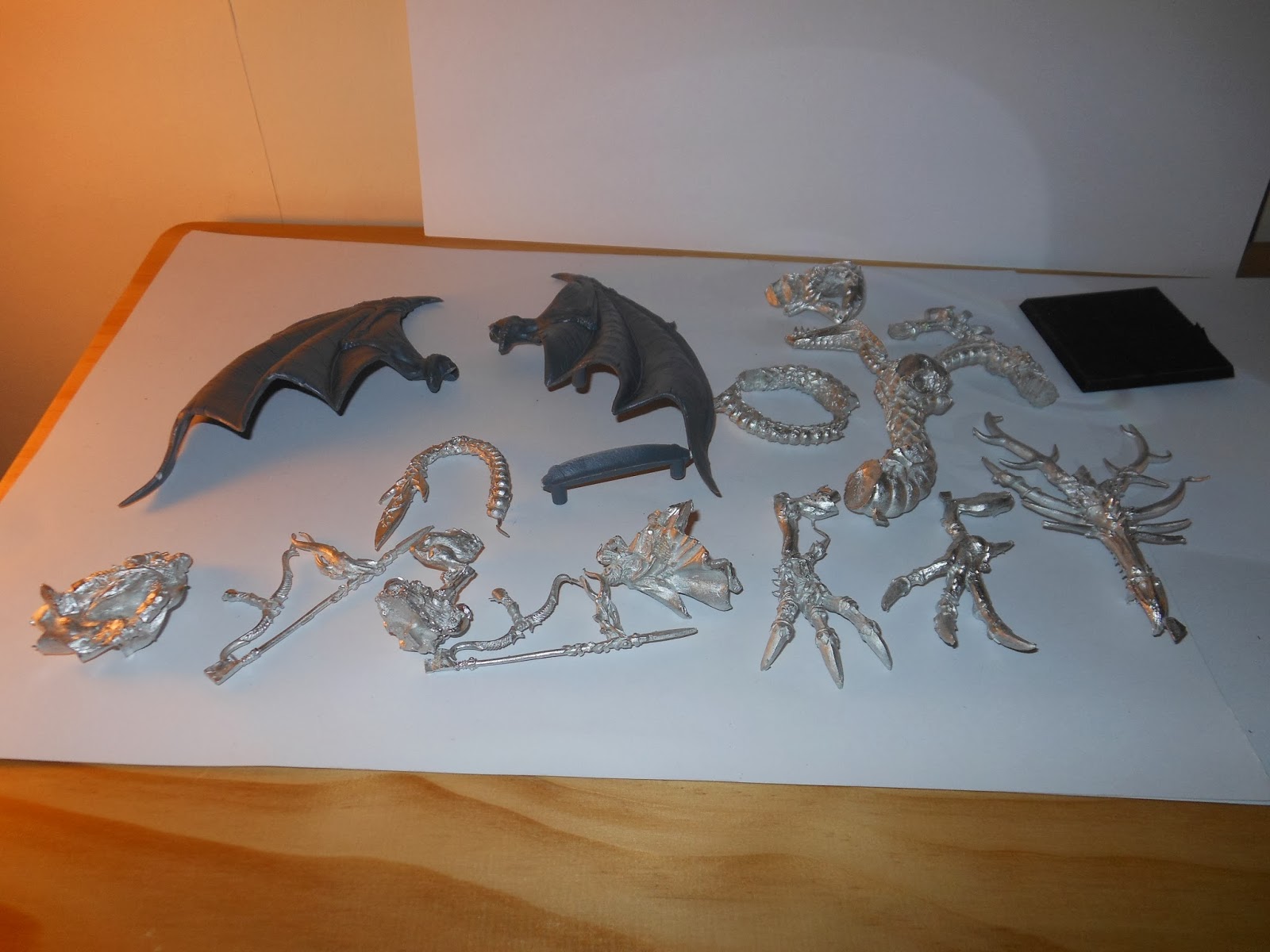 As well as.... an Immolator component?? 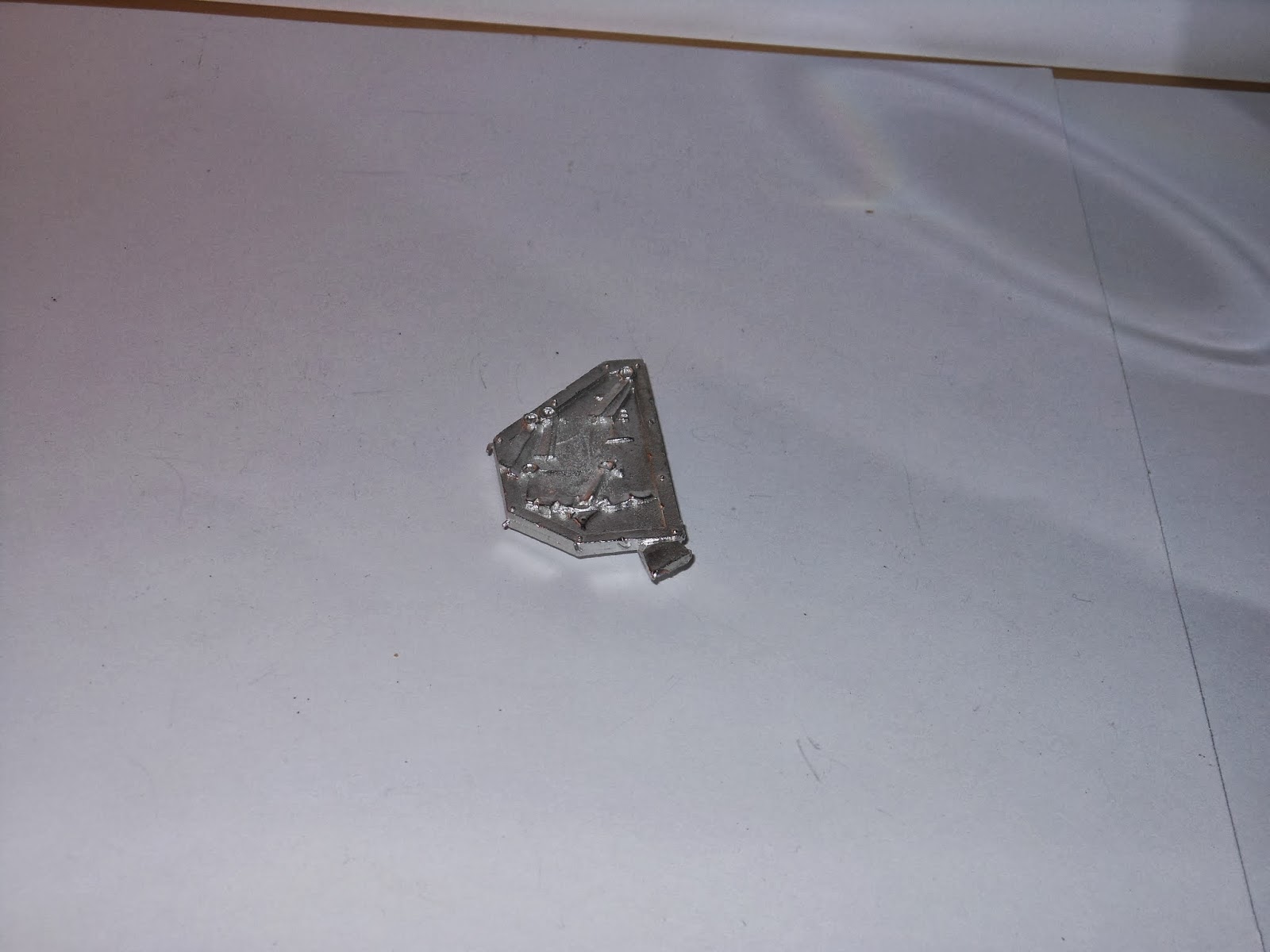 At least I think it's from an Immolator. It's definitely from a Sisters of Battle tank. It came in place of the little scenic doodad which seems to come with the Sisters of Twilight kit, which irks me somewhat, since it means I don't have said little scenic doodad. I also feel a bit bad for the poor Adepta Sorroritas collector who ripped into their shiny new Immolator/Rhino/Exorcist box and discovered a pile of wood instead of a track plate. Oh well, I suppose I could substitute the other little scenic doodad I have floating around, it looks the part well enough.

And I also got a Unicorn, which will serve as a faithful steed to my Spellsinger. 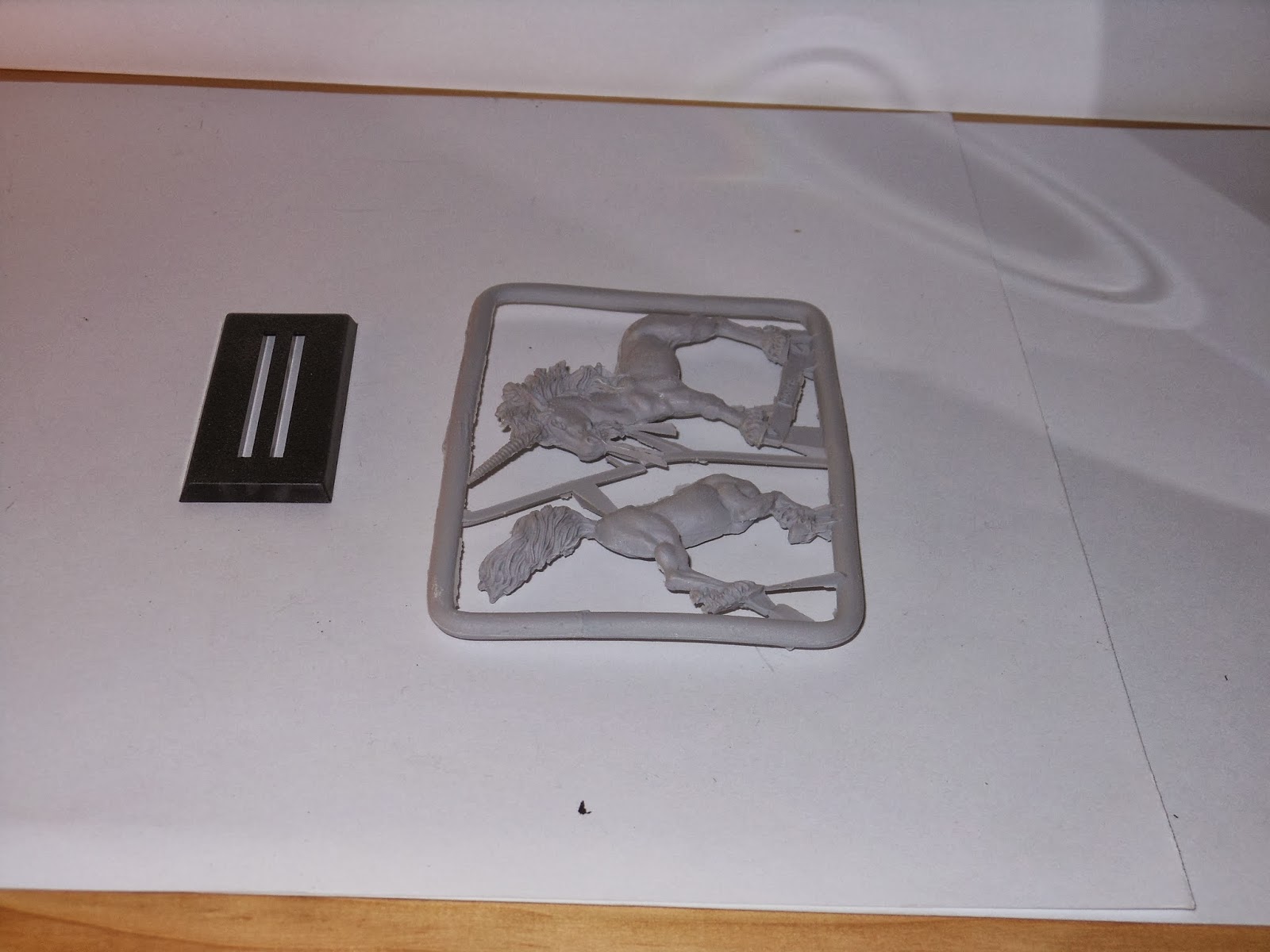 And now as a reward for putting up with all these pictures of unassembled classic miniatures (hey, the blog's called Naked Metal for a reason you know), I now present what I've been working on these past two weeks: my new Spellweaver, Aneaeth Ollissin (her first name's pronounced 'Anne-ee-ath' in case you were wondering). Now at last my army has magic support! 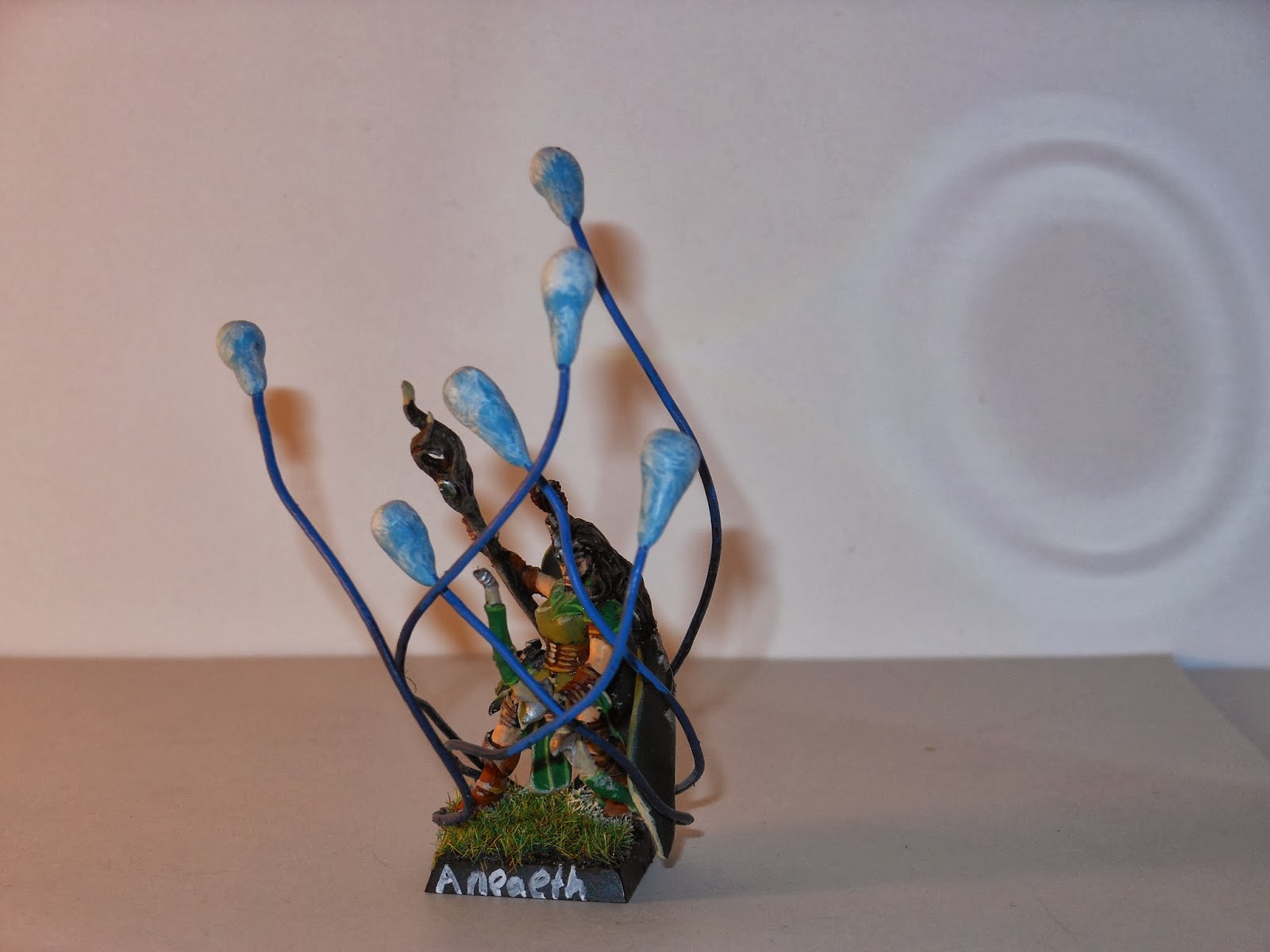 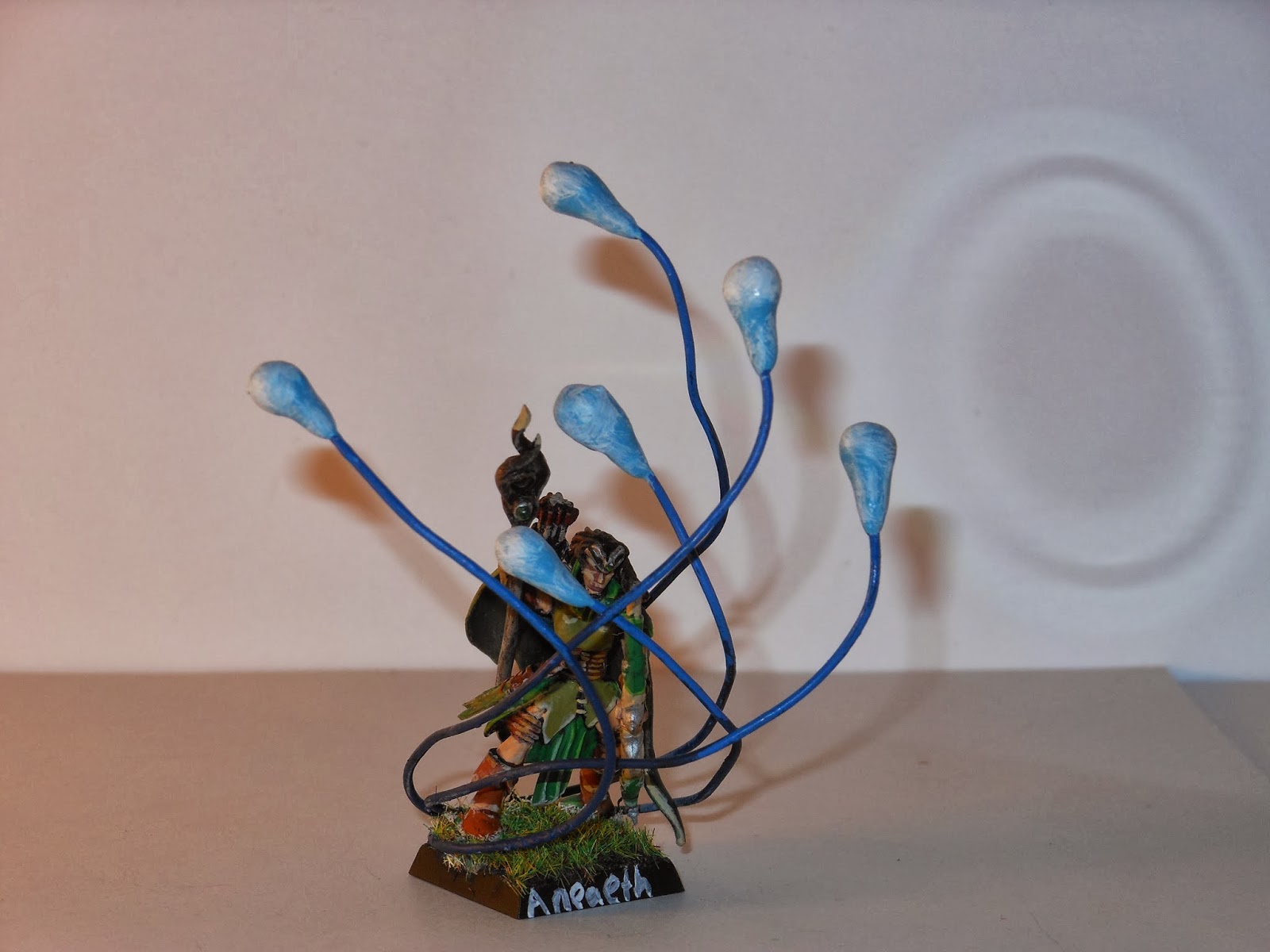 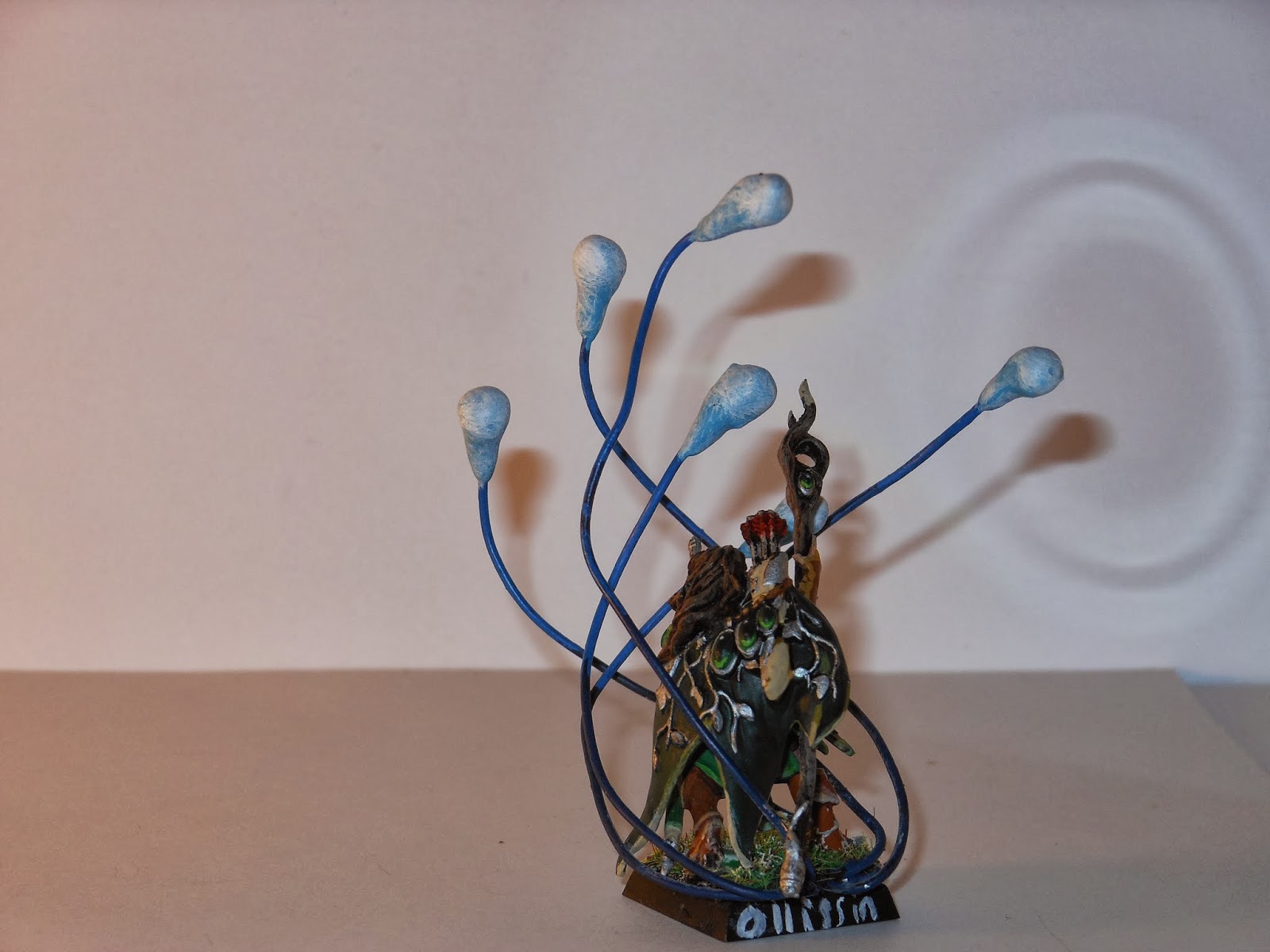 And here she is with the first of my Glade Guard units, Summer Lightning, enhancing their arrows with the Resplendence of Luminescents floating around her. 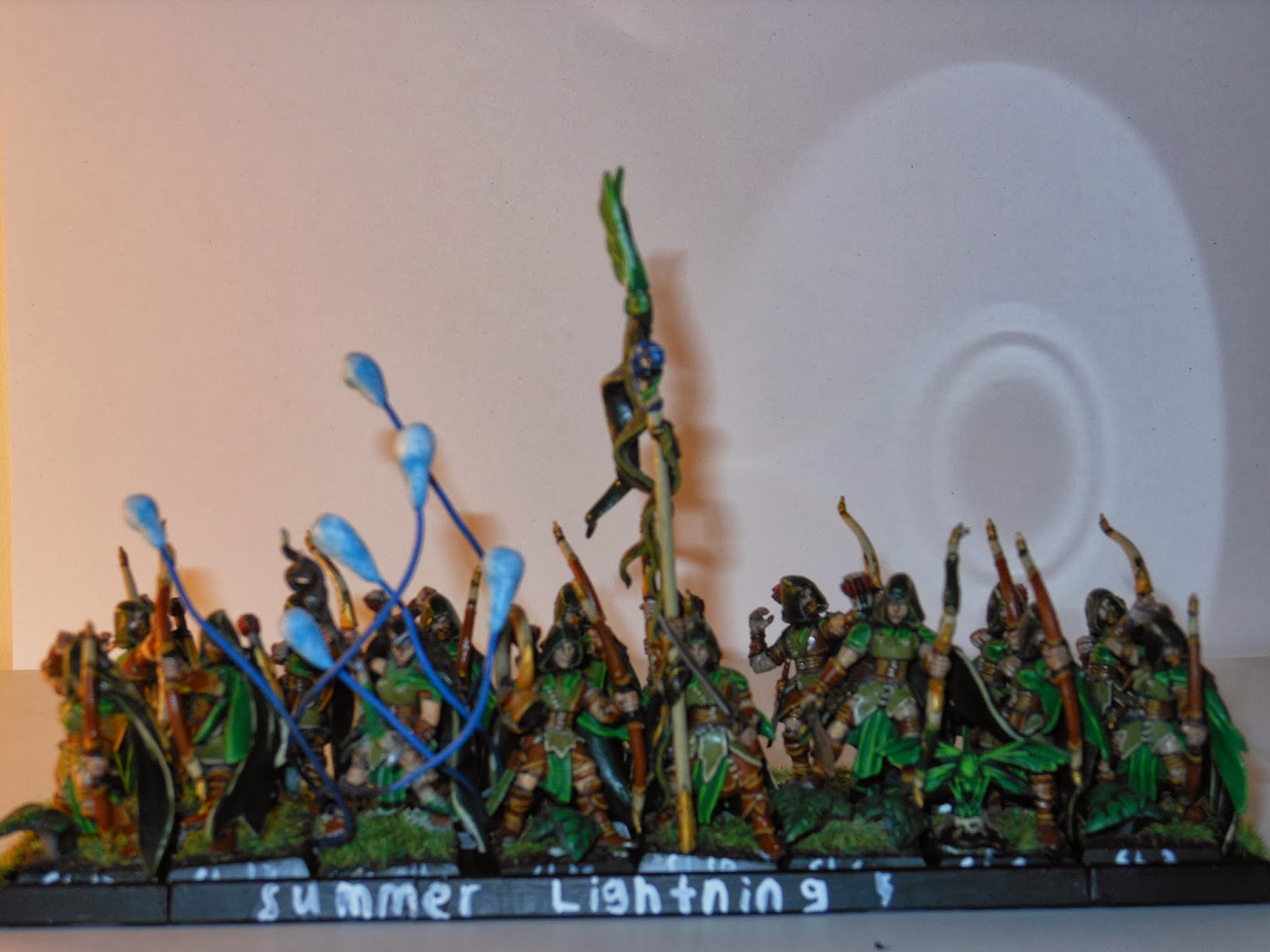 Oh, and while I'm on the subject of Glade Guard, I'll be putting together my second unit of them soon, and I was wondering about something. See, back when I was first conceiving this Wood Elf army, I had this crazy idea to base each of the four main Glade Guard units in it in a different season - Summer, Winter, Spring and Autumn. The colour scheme would stay the same with each unit, only the bases would be different. I think this could be a big success, since in theory it keeps the army looking uniform while adding variety and making each unit pop, and I have some background justifications for the phenomenon, as well as ideas on how to model each season, but I worry the end result might not look terribly good. What do you think about this? Come, share with me your thoughts my avid faithful readers. Both of you!

Well that's all I have for now then, now I have to write up background for my new creation on my Wood Elf thread on Asrai.org.

Email ThisBlogThis!Share to TwitterShare to FacebookShare to Pinterest
Labels: Games Workshop, I bet no-one will figure out what that Spellweaver's name is a reference to, miniatures, Tabletop Wargames, Warhammer, Warhammer 40000, Will never be red by anyone, Wood Elves
Newer Posts Older Posts Home
Subscribe to: Posts (Atom)