So as my Tabletop future continues to bleed and burn, I finish the first of my new Tau army's units - a team of Firewarriors.


I'm starting with Firewarriors for a number of reasons - they're one of my three favourite Tau models of all time to start with, and they'll be a major component of the finished force. Most importantly though, I always start a tabletop army with some basic infantry units - because you can bomb it, you can strafe it, you can cover it with poison, you can turn it into smouldering glass, you can consume it with eldritch extra-dimensional energies, but you don't own it unless your infantry is on it and the other side's isn't. 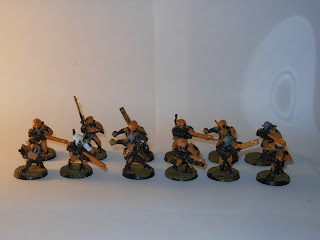 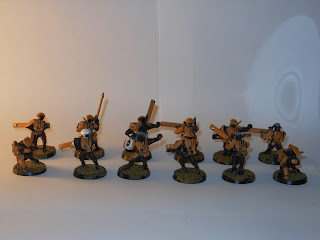 This is the first Firewarrior team I ever owned, I think I must have been 9 years old when I got them. I still remember having endless fun putting them together over an afternoon. At the time I was still digesting the shiny new 4th edition 40k rulebook (which still remains my favourite 40k BRB) that I had gotten for Christmas the previous year, and I had recently started exploring the Dark Millennium hobby section in more detail. Something that had particularly caught my eye while going through it was the sections on Kill Team (real Kill Team, with one player using a Kill Team and the other controlling Brute Squads and more references to action movie tropes than you could shake a machine gun at. Ahh those were the days) and Raid scenarios with sentries. In particular, I was fascinated and immensely inspired by the various conversions of infantry models showcased in the sections, and quickly decided to take a recurring passage from the Kill Team section to heart and make every model in my new Firewarrior team unique. Some were actually given specialised roles, while most were simply just normal troopers, but I gave each one a distinct personality even if it was only in my imagination. Much of them are now sadly lost to time, but I still remember a few of the more specialised roles.

You may notice that there are two Firewarriors in the team with white markings. The story behind this is that when I had finished assembling the team I then stopped to decide which one of them should be the team leader, using the only relevant and worthwhile metric there is to a 9 year old - which one of them looked the coolest! I had of course been naturally building up one in particular with an eye towards being the team leader, but when it came time to decide I was torn between that one and the one immediately next to it, who had ended up with an awesome action pose that I have never quite been able to replicate, much to my frustration. In the end I decided to settle the matter by simply painting both of them with white leadership markings, making my first candidate the Shas'Ui team leader and the alternative choice the team's second in command, a tradition that has carried over to all of my Firewarrior teams ever since.

This Firewarrior team also marks one of my earliest experiments with basing models. I had already read through the instructions in the 3rd edition Tau codex on how the studio Tau models were based (which I've been following for this new Tau army), but at the time it seemed rather complicated, and required paints I didn't have, so instead I simply went through the more basic method suggested by the Lord of The Rings Strategy Battle Game magazines I had also been getting a steady supply of, got a bag of flock (back when GW still sold bags of modelling flock) and began to apply it to the bases of my Tau models. Since it was already green, I saw no reason why it would not yield a passable version of the typical grassy field basing scheme commonly found. The end result was less than spectacular - my child motor skills and perception abilities proved insufficient for the task at hand, and the flock ended up being applied very chaotically. Ultimately I deemed it such a disaster that I avoided basing models at all until four years ago when I started my Wood Elf army (and used the simple innovation of finishing bases separate to the models to avoid getting any basing materials on feet and shins).

At the time I was (and still am, all things considered) awfully proud of this Firewarrior team. Now let's see how their successors stack up. 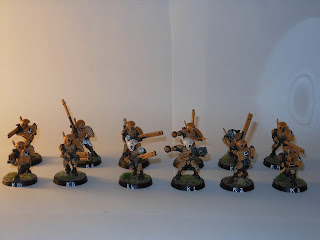 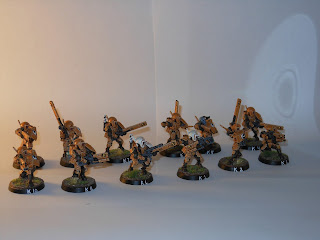 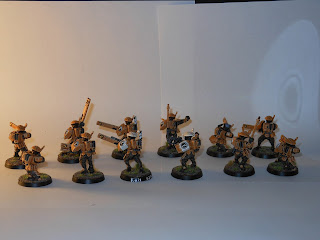 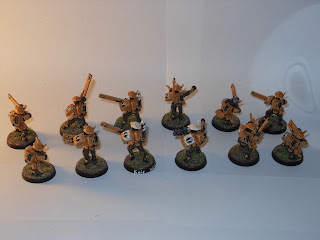 Firewarrior Team Kais (as if it was going to be called anything else given my love of the old Fire Warrior computer game) is my first new Firewarrior team in over a decade, though it is also a homage to the previously documented one and contains several throwbacks to it. Like the first team before it, I've taken the idea of personalising and special roles to heart and made the unit a sort of 'Kill Team lite', including several specialised members. Some, like the tech specialist and honour guide, have been carried on from the first team, while others, such as the demolitions expert and medic, are entirely new. Almost no component swaps or kitbashing was used to make the team - I am keeping conversion work in the army down to a minimum, because A) I already think the models look fantastic as they are and don't really feel the need to modify them too much, B) I'm looking at focusing more on getting the most out of the model kits themselves and pushing them to their limits rather than introducing lots of outside elements and C) it will make the major conversions I actually do really stand out that much more.

Thus, the only component used in this unit from another kit was the Shas'Ui's markerlight, taken from the new Pathfinder kit. I think most of all, more than anything, my favourite part about the 2013 6th edition Tau releases was the introduction of a readily available separate markerlight bit, and I have obtained an entire box of Pathfinders purely to harvest for markerlights for my team leaders (though other bits on it will be coming in handy also). It is a testament to the flexibility of the old Firewarrior kit that I was able to make all of the specialists that I wanted (5 in total) using only the parts contained within it. Plus a little greenstuff and a piece of sprue frame (and the ubiquitous florist's wire for the Shas'Ui's stylish data-cables).

The team also carries on the tradition of a Team Second painted with a white helmet and shoulder guard panel, now with an in-universe justification as a deceptive countermeasure against enemy snipers. It also allows me to split the team and field it as two units of 6 Firewarriors with minimal fuss if I so wish (I can also conveniently make both teams Bonded by simply including the honour guide in with the Second's group). Her pose is a direct reference to the first team's Second, though not an exact copy (mostly because I wanted that set of legs for another use), with the other major change being a worn helmet, as I am moving to the old 3rd edition GW studio Tau army's pattern of only one bare head per Firewarrior team. Even then all of the infantry models will have a helmet somewhere on them, as what I've read suggests that going into an active warzone without some kind of head protection is widely regarded as a bad move.

Painting wise it's nothing that hasn't been already shown on the test models, with the exception of the white panels on the Shas'Ui and his second. I experimented with them after the thought suddenly occurred to me that the erroneous colour choices listed in the 3rd edition codex's painting instructions might have been a typing/publication error (as they say, never attribute malice to what could simply be incompetence) and they really meant Bleached Bone instead of Vomit Brown. Thus, I tried a 3:1 mix of Skull White and Bleached Bone (that's White Scar and Ushabti Bone for you youngsters reading this) for the main white colour and was tickled with the results, which were much closer to the white on the studio models. The only question left after this breakthrough was how to highlight it, for which I used a 3:1 mix of White Scar and Screaming Skull followed by a final highlight of White Scar. The Shas'Ui also has a simplified pattern of team-markings on his helmet and shoulder guard, indicating his team is a 'tactical' Firewarrior Team armed with a mixture of pulse rifles and pulse carbines.

This update was delayed for a long long time as painting the team ran dangerously behind schedule. I had originally intended to get it finished before the start of the month, and was confident I would by using a production line painting method. The last army I worked on was a Wood Elf one for Warhammer Fantasy, where an overall production line was impractical on the plastic Glade Guard that formed the core of the army - units in Warhammer Fantasy are tightly ranked, and thus all the models in them must fit side-by-side, and since I was also working in sub-assemblies for maximum access during painting this meant I had to go through an entire unit one model at a time to make sure they all fit together when fully assembled (I tried keeping unpainted ones together with blu-tack at first, but that proved to be of little help as they kept falling apart or leaning over), and thus production line painting was only used for metal units. Since 40k units act in loose formation, this was not necessary, simplifying things considerably, however going through the entire unit in a gigantic production line quickly proved exhausting, and after two weeks I finally gave up and started working through it two models at a time. The end result has left me almost a month behind my initial planned schedule, and I fear the delays have meant that I will now never end up playing a full game of 40k at a GW store (unless they relax their policies on using older rules editions for games in there), as I will not use the coming 8th edition rules - I have already heard enough about them to know that they are not what I am looking for for 40k gaming.

Still, all in all it is a fine start to my Tau rearmament program. Now to give them some backup...
Posted by MillitantGuerillaCommunistHippie at 17:20 No comments: