Finishing off the last of my Battlefleet Gothic Tau from yesteryear is this wave of Forgeworld attack craft models. 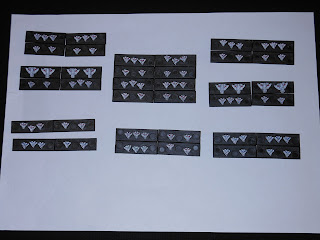 It turns out I actually bought more Barracudas then I thought I had. Originally my plan was to just cover the attack craft compliment of the two Hero class starships and maybe the orbitals, but upon further examination I found I actually had gained all the fighter stands my fleet would ever realistically need (Though there'd still be a shortage of Mantas).

This also marks the first appearance of blue trims in the fleet. As you can see if you dig back far enough in the thread, my plan with the fleet was to differentiate ship configurations by colour - ships in the standard configuration (Vash'ya for Explorers, Kel'shan for Merchants and so on) would get a red trim, while ships in a variant configuration (Bork'an for Explorers, Dal'yth for Merchants and so on) would bet a blue trim instead, and command elements like the flagship would have a green trim. Unfortunately the untimely demise of the Specialist Games meant that I was never able to get all the ships I wanted (for reference, the fleet I have now is about half the size of my initial vision), which means that there currently aren't any capital ships that are in any variant configurations, so everyone has red markings except for the flagship and its attached escorts. Like I said though, I actually picked up enough fighters to fill out the launch bays on the extra ships I never got, and I do plan on opportunistically expanding my fleet further with whatever comes my way on Ebay and other places, so I painted up a few blue squadrons just in case. I painted one squadron with a green trim too to represent my attack craft commander, B'Aloh.

And with it, my Tau fleet is more or less finished. 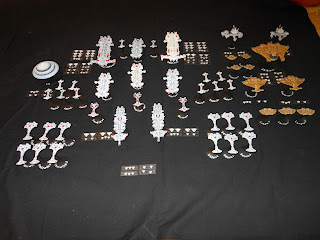 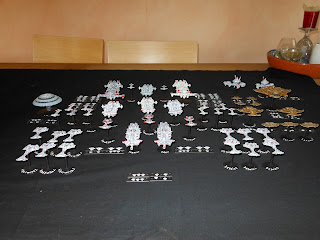 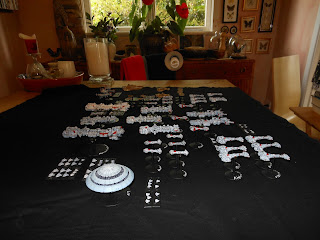 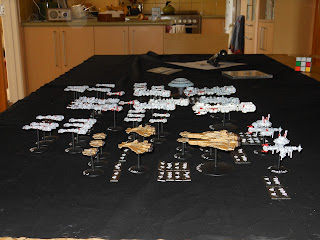 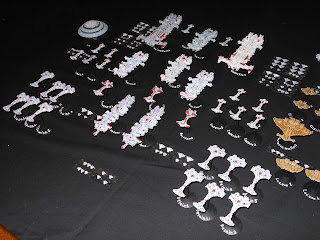 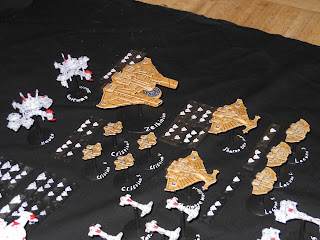 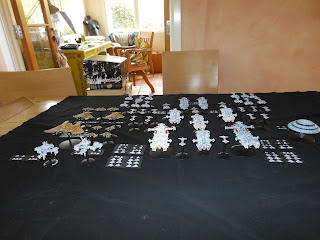 It's still not fully done. There's a second Custodian I'll be painting at some point, and I have plans to make some celestial phenomena at some point. I also will be writing background stuff for every ship and escort squadron. But the bulk of the work is now done.

Space has been great and all, but I think now I'm ready to come back to my enchanted forest for a bit now. That administrative work won't do itself you know.
Posted by MillitantGuerillaCommunistHippie at 20:20 No comments: