In case you didn't know it already, for some time now I've been a member of Advanced Tau Tactica, the premier online forum for high-quality content regarding the Tau in Warhammer 40,000 (and Battlefleet Gothic), run by none other than tabletop hobby rock-star Sebastian 'Tael' Stuart (if you were following GW games around 2005-2007 you may have seen some of his models featured in White Dwarf). Over the last few months I've been working with the ATT moderators and admins on a very special project - the first ever ATT global campaign, Wurrshuv's Revenge.

It works in much the same way as most other big global map-based campaigns in the past, drawing a lot of inspiration from the legendary Eye of Terror and Third War For Armageddon campaigns run by GW, but also more recent campaigns such as Battlefront's Firestorm: Red Thunder and its sequel Firestorm: Stripes. The mechanics are fairly simple, with each territory on the map having 100 points split between the Tau and Orks fighting over them. Reporting games moves points from one side to the other, depending on the game results, and whoever has a majority of points controls that territory. Hold enough territories for long enough and your side will win the campaign.

You'll need to have an account on Advanced Tau Tactica, as that's where all the game reports are being tracked, but due to site access being restricted for unregistered guests I'll also be hosting campaign updates on here as well. You won't really be able to contribute much, but you will be able to follow the campaign along as it unfolds. 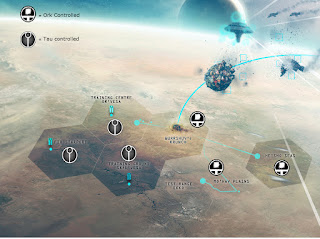 Almost one Kai'rotta after the initial Ork landing on M-88, the Tau are finally in a position to begin decisive counter-attacks. Hundreds of cadres from across the Empire have been sent to the planet to aid the ATT forces fighting on the surface against the Ork invaders. The Greenskins themselves have not been idle either and continue to hold the strategic and operational initiative, keeping pressure on the Tau forces with powerful offensives to the north and south of the main concentrations of Tau.

New waves of Ork Roks have arrived in the inner biosphere on approach to M-88, alongside the occasional Freebooter warship. The Tau fleet has engaged these Ork reinforcements with great success, but more Ork space forces continue to arrive from the system's outer reaches, and much of the Tau fleet has been occupied in hunting down incoming Ork Roks before they reach the surface of M-88. This has left the Tau with only limited aerospace support from the fleet.

The two belligerents begin to enact their next moves, and in the process burn their names into history...

Since conquering the region in the early stages of the invasion, Wurrshuv's forces have made the He'Sho Seas secure territory, and permanent Ork settlement is thriving in the area despite Air Caste interdiction missions and Stealth Team raids. Vast armies of Gretchin and slaves now toil in labyrinthine mines torn into the face of the world, excavating thousands of tons of metals, chemical salts and crude fossil fuels with which to feed Wurrshuv's war efforts. Recognising the strategic value this mineral rich region holds and responding to the Tau efforts to disrupt the mining operations, Wurrshuv has ordered the construction of extensive defences in the region, including a full network of Intercepta Rokkit batteries. Airbases have also begun to spring up in the area, allowing Ork Fighta-bommerz to provide more comprehensive air cover over the territory.

The He'Sho Seas region has also begun the process of colonisation by Orkoid lifeforms. Freshly seeded fungus farms have begun to spring up between mining forts, while Squigs and Snotlings have been observed roaming the wilderness in increasing numbers. To support the mines, numerous Ork settlements have been founded in the region and their size and population density is growing rapidly.

Though subject to frequent Tau airstrikes, the Orks retain a strong hold on the Mo'Hav plains and the routes between Wurrshuv's Krunch and the He'Sho Seas. Hundreds of miles of roughly hewn roads cut into the landscape now run between the Ork strongholds in the Krunch and the mines in the He'Sho Seas. Large convoys ply these crude roadways, transporting goods between the Ork territories. Convoys leave the He'Sho Seas carrying cargoes of raw materials and return with fresh supplies and equipment produced in the Krunch.

Tau long-range reconnaissance elements have begun to map this Ork road network, but the immense size and chaotically tangled nature of it has made progress slow. That new roads are created daily, and older ones are frequently abandoned has not made the task easier.

The site of the initial Ork Rok landing, Wurrshuv's Krunch has become the clanking smoke-belching heart of Wurrshuv's nascent empire. Under the protective cover of massive crackling force-fields, the Orks have thoroughly infested the region and the territory is now strewn with titanic sprawling Ork fortresses, bristling with firepower and crammed with murderous Ork warriors. The Ork defences in the area, already formidable even in the early stages of the invasion, have been constantly expanded and reinforced, and many among the ATT Shas'ar'tol fear they may be impenetrable.

Ork reinforcements from further in the system continue to pour through the internal tellyporta array within Wurrshuv's Rok by the hundreds of thousands, and hulking foundries and crude industrial plants churn out an endless supply of weapons, vehicles and munitions from the raw materials mined in the He'Sho Seas.

Note: Due to heavy Ork defences and overwhelming numbers of Orks in the area, Tau players may not report games in this region.

The front line of the Empire Sector, Training Ground Saal'vesa has become a staging ground for the upcoming Tau counteroffensive. Temporary bases for Hunter Cadres litter the area, and the forces of the Empire have been training intensively under the supervision of ATT veterans. Supply dumps also permeate the region, established in anticipation of the counteroffensive.

With the defences around Wurrshuv's Krunch proving too strong, the Tau have had to adjust their plans, and their new strategy calls for a bypass of the Ork stronghold to attack its supporting infrastructure in other territories. Given the likely axis of advance southwards and eastwards for the Empire forces, they are likely to encounter the approaching onslaught from Wurrshuv's Speed Freaks head on.

The Ork forces comprising the Northern Raiders have pushed deep into the region surrounding Training Centre Or'vesa. The fighting has been bitter and bloody, with quarter neither asked for nor given, but the Tau forces here have managed to hold the line and stabilise their control of the territory. The Auxiliary forces have suffered the worst losses, with many Kroot Kindreds cut off from friendly forces and fighting for their lives as the marauding Ork warbands ruthlessly hunt them down.

The Enclave Tau operating in the area have launched a full-scale counter-attack against the Northern Raiders and have made several attempts to link up with the scattered Kroot forces, though none have thus far yielded success.

Tau troops and supplies continue to filter through to Fio Starport from the ATT Orbital and Tau starships in orbit. With most of the Tau fleet otherwise occupied, the starport has become the centre of Air Caste activities in support of the Tau operations on M-88. Large numbers of Air Cadres have been forward-deployed to the starport, and it is from here that long-range airstrikes and reconnaissance overflights in Ork-held territory are coordinated.

The Earth Caste has outdone themselves in the expansion of Fio Starport, and the Tau complex has grown to be one of the largest permanent installations on the planet, almost approaching a small colony in size. Extensive command centres have been established alongside field training facilities and temporary academy campuses. Life in Fio Starport has almost become a mirror of life on the ATT Orbital above in miniature.

Note: Due to the extensive Tau defence networks in place within this region, Ork players may not report games in this territory. 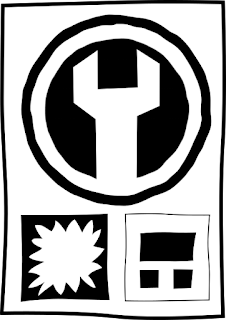 And there you have it for the start of Advanced Tau Tactica's first forum campaign! There is a ton of background lore that's also been written covering the backstory behind the campaign. There was talk about making a PDF out of it, so I'm waiting to see where that goes before I post it here because a post on here containing it would be gigantic (seriously, it may rival an actual GW codex in length).

If you know anyone who is a member on Advanced Tau Tactica, encourage them to join in! And if you want a piece of the action yourself, sign up on the site! Ork players are especially welcome for it (and you can always leave afterwards if you have no interest in the Tau). Just remember to keep to ATT's rules and guidelines - we're very serious about them.
Posted by MillitantGuerillaCommunistHippie at 23:21 No comments: