Where Tabletop Games are dominated by ugly CAD models... and shitty metaplots...

When your tabletop characters and armies are no longer your own...

And say NO MORE to modern GW...

From the creator of Symphonic/Folk metal elves...

Comes a sequel seven years in the making...


And so it begins - my return to 40k. I always knew this day would come.

You may not know it from reading this blog, but the Tau in Warhammer 40,000 were the first ever tabletop army I properly started. Since then they have always been one of my favourite factions in Battlefleet Gothic, but since around 2010 or so I've neglected the army in favour of building up the Tau fleet in Battlefleet Gothic that I've posted about on here. The last few years, when my tabletop capacities have really taken off, were focused on Battlfleet Gothic and Warhammer Fantasy (don't I have the best luck when it comes to picking tabletop games?), leaving 40k to languish on the back-burner.

This all changed a few days ago when I started on a long-awaited massive rearmament program to totally modernise my ground-sloggers.

To start with, let's go back a bit and take a look at where it all started, with this guy. 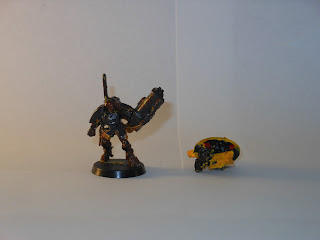 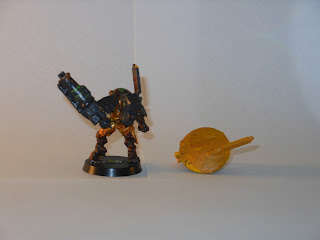 A metal XV15 Stealthsuit Shas'vre (plus his faithful gun drone) - and the first Warhammer 40,000 model I ever owned and painted, when I was 8 years old.

This wasn't the first tabletop model I owned and painted. I had been collecting Lord of The Rings models in the form of the old Lord of The Rings Battle Strategy Game magazine series by DeAgsostini, (what a fantastic stroke of brilliance that was), but those were only ever meant to be a stepping stone to 40k, something to practice on until I got to the models I was really after.

Thus, I consider this to be the official start of my journey into 40k and tabletop games. He came from my first ever trip to a GW store, which in those days was conveniently located just downstairs from my optometrist at the time. I had been doing some research beforehand (read: spending hours on the GW and Forgeworld webpages ogling all the gorgeous Tau models displayed on there and ravenously devouring every scrap of information about the Tau I could find on there), so I already had a good idea of what my first model was going to be, the one GW kit (not Forgeworld) that had so far captured my admiration and imagination more than any other - a Hammerhead Gunship. Extrapolating from Forgeworld (which I did not know at the time was a separate subsidiary of GW and not usually stocked in stores), back when Forgeworld still listed normal GW kits on its website, I initially assumed that the Hammerhead would be a relatively small model no larger than a Rhino, and with a cost of around $25. You can perhaps then imagine my surprise when I discovered that it was in fact a massive $72 beast of a kit, which put it squarely in birthday and Christmas gift territory. This disappointed me somewhat, especially when my plan B - a Broadside Battlesuit - also proved to be out of financial reach at $55, but that was quickly forgotten as I started my first introductory game of 40k, commanding 6 Firewarriors against 3 Chaos Space Marines. It was a quick victory as I ended up shooting one or two to death and then beating the remainder in close combat with zero casualties sustained (I still have lingering suspicions that the staff member opposing me might have fudged the results somewhat to get me more enthusiastic about it), and then ended up walking out of the store with the models posted above after being allowed to get "One little thing" from the shelf of blister packs. My primitive childhood reasoning for choosing them was simple - I loved the Firewarriors (remember the Fire Warrior artwork that first got me interested in the Tau), so naturally when I saw a Firewarrior with a Gatling gun I picked him. I was wild with excitement when I got home and actually read the label on the blister pack to find that I was in fact now the proud owner of a Tau Stealthsuit - a Firewarrior with a Gatling gun, a jetpack, a robot sidekick AND he can turn invisible? Hell Yes! Even now I'm still very fond of Stealth Teams.

In addition to the Stealthsuit, I also went home with a Citadel Paint set, which went on to serve me well for over a decade - in fact I still use some of the paints from it to this very day. The Stealtsuit went through several changes in colour scheme over the years. You can see the colour scheme he was originally painted with on the gun drone, and it was a crude attempt to recreate the Fire Warrior cover artwork that was so compelling - my child logic was that I wanted an army of troops just like the one on the Fire Warrior cover, and that one was wearing yellow armour, and I had a pot of Sunburst Yellow from the paint set, so naturally I should paint my new models yellow, with some red optics. I then spent the next two nights lavishing Sunburst yellow on the two models until I was satisfied with the coverage. The end result can be best described as a pair of mostly yellow blobs, but I was still very happy with the results. This continued to be how the Stealtsuit looked until one day after school I suddenly thought to myself "You know what would look really cool? A gold Tau army! Think about it, an entire army of high-tech Tau in solid gold! Gold is cool and high-tech, and lots of cool ancient cultures had gold everywhere, and they looked cool, so I should make my Tau GOLD!"

It never occurred to me at the time that this would have resulted in my army all looking like C-3PO, so I rushed home and immediately painted all the Tau models I had at the time (3 of them) in a full coat of Shining Gold over a Mithril Silver base. I eventually converted most of them back to what would become the colour scheme I settled on, but this guy remained gold for a bit longer before I finally decided to get serious and painted him in the crude attempt to recreate the GW studio stealthsuits that you see today.

The Drone was lost down the back of the desk I did my hobby work on back then, and so was spared the many colour scheme revisions I made. I no longer remember whether the orangeish-tanish splotches were an attempt to paint over the yellow areas with Vomit Brown, or if I just put so much Sunburst Yellow on it that it ended up looking that way. There was originally a second pulse carbine on it, but that has since been lost to time along with the flying stand that I foolishly decided to glue it onto. Working without any kind of assembly instructions, I was confused about which way to stick the antenna on - I had faint memories of seeing it pointing backwards on the back of a Firewarrior box, but then seeing the artwork on page 60 of the Tau codex (which included a gun drone with the jetpack exhaust facing forwards and the antenna away from it) threw me off, causing me to end up gluing the antenna on the wrong way. You will be glad to know that I did not make the same mistake again.

At some point in the past the other antenna on the Stealthsuit's jetpack broke off. I think I might still have it somewhere, but never attempted to glue it back on again.

Now, let's come back to the present and see what 13-14 years of experience and progress (like learning to actually layer colours) can do. 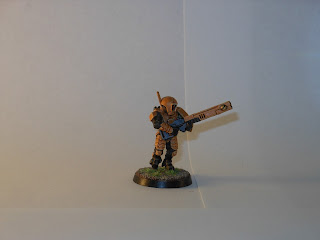 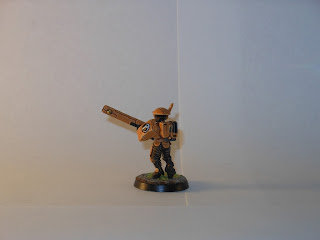 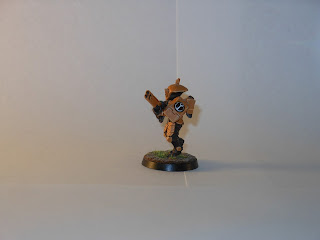 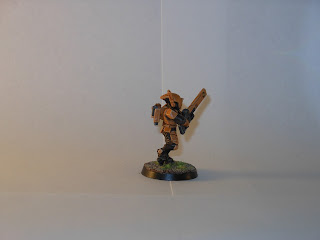 This is the first of my revamped Tau army, a Firewarrior test model. The colour scheme I am going with is the same one I attempted to recreate when I first started a Tau army - the classic T'au desert camouflage scheme. This project is to be a homage to and celebration of the old Tau army I first fell in love with as much as it is a renovation and modernisation.

Thus, the process I used was almost exactly the same one described in Codex: Tau, substituting in newer colours for those no longer available. I had originally planned to follow the process as described to the letter, but eventually found out (as I had already discovered when building my Wood Elves) that even the older GW painting instructions are a lot like the cooking recipes my grandmother used to share - an accurate general set of instructions, but they don't tell you everything you need to know, missing out one or two key details that are on the 'Evy Metal examples. To compensate I added an extra stage of highlights - Ungor Flesh for the armour and Steel Legion Drab for the undersuit, and applied the same process used for the Battlesuit mechanical areas on the darker areas of the gun and backpack. The other final details were relatively straightforward, and this is one of the very few models I've ever painted that I'm genuinely happy with - I still have trouble believing that the highlights and jewelling on the helmet were done by my own hands.

All in all, I'd say I've come a long way since the days when yellow blobs roamed the earth. Now to see what I can do with a full army...
Posted by MillitantGuerillaCommunistHippie at 20:17

Email ThisBlogThis!Share to TwitterShare to FacebookShare to Pinterest
Labels: miniatures, old skool wargaming, Tabletop Wargames, Tau, Warhammer 40000, Will never be red by anyone