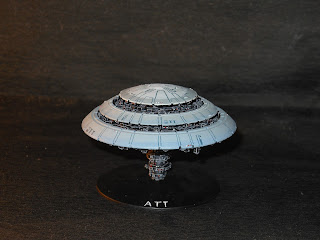 In case you've never heard of it before, Advanced Tau Tactica is an online discussion forum specifically focused on the Tau faction in Battlefleet Gothic (and Battlefleet Gothic's spinoff games like Warhammer 40,000) . It has an illustrious history of providing exceptional-quality content for Tau players, especially tactics advice, and several famous Tau tactics have had their start either there or on its immediate predecessor Mech Tau Tactica (such as the infamous Fish of Fury). Run by tabletop hobby extraordinaire Sebastian 'Tael' Stuart the site has a reputation for harsh order in some circles, but by and large is a fantastic place to go if you're a Tau player.

The other thing to note about Advanced Tau Tactica is that the site has an extensive mythos within it, centred on the ATT orbital, an in-universe reflection of the forum. The ATT orbital has had a few different incarnations over the years (not entirely unlike just about everything else in Battlefleet Gothic's universe), but it is consistently an illustrious Tau military academy where some of the Tau Empire's best military minds gather to discuss and examine strategy and tactics, and learn from the masters. In other words it's sort of like a Top Gun program for Tau military forces. It's been subjected to a few attacks from other Battlefleet Gothic forces as well - you can see the details here (look for the threads listed as 'April [Date]', they should be stickied at the top).


Way back in 2013 when I was frantically scrambling to rescue as many Battlefleet Gothic models as possible I ordered a number of items from Forgeworld. One of them was an Air Caste Orbital City. I had always wanted to paint an Air Caste Orbital City as the ATT orbital (though originally it was only going to be one of multiple Air Caste Orbital Cities...), especially after Embrace Change, so when the Specialist Games started to get discontinued I made sure to pick one up along with the Forgeworld Tau ships I wanted so that I could at least salvage that minor dream. 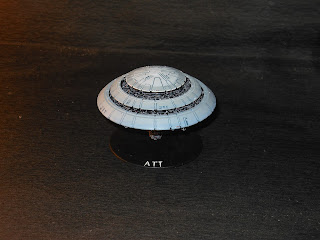 I wanted to keep it an absolute secret so that I could surprise everyone on there when the time was right. Exactly when that would be changed quite a lot. At first I planned to have it finished shortly after the Custodian (see April 2015's post for the details about that - Ed), but the university workload became too much and so I had to put on hold almost literally everything not related to university work in order to withstand the relentless avalanche of assignments. When I finished university and looked towards restoring my life there wasn't enough time for everything, and painting priority went to the Warhammer Fantasy models that I had started just before the big freeze. After they were finished my free time went towards rebuilding my shattered blogging activity, and so it wasn't until about a couple of months ago that painting on it could begin in earnest. Initially my plan was to finish it in time to reveal it just after Advanced Tau Tactica completed the major upgrade work that had been scheduled for this year, but that happened much sooner than I anticipated, and painting the model took far longer. The final deadline was Christmas, with the release scheduled for just afterwards (as I didn't want it being overshadowed by Yuletide festivities). After this painting went smoothly, and I was set to be right on schedule until some idiot D'yi decided it would be fun to drive a car into a transmission pole which knocked out the power to my neighbourhood for the rest of Christmas Eve. I painted like a man possessed, but in the end as dusk fell I ran out of available light with which to paint by, and so was forced into yet another delay, with the orbital finally being finished on Boxing Day. 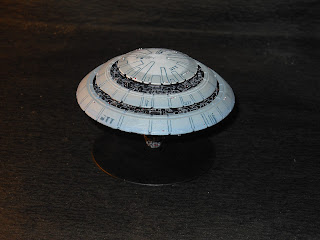 In hindsight (as you will see with the other pictures, and might possibly be already able to guess) it is easy to see why it took so long to paint. The Forgeworld designers weren't kidding when they called it an orbital city - the vast majority of the model is covered in an immensly detailed and intricately designed layout of a cityscape. The bottom piece even looks a lot like a Hive City spire if you turn it upside down. This makes for a fantastic rendition of a model (and also provides the best depiction I have seen of what a Tau city would look like from altitude), but also means that the bulk of the model is covered in a nightmarish twisting labyrinth of surfaces and edges that all need to be painted. If the Custodian was the painting equivalent of trench warfare, then this model was the painting equivalent of urban combat, and my work flow quickly devolved into a gruelling quagmire as I slowly painted it street by street, building by building, room by room, highlight line by highlight line.

The dark mechanical 'city bits' of the orbital were painted the same way as the dark mechanical areas on the Custodian. After an undercoat of Abaddon Black I applied a heavy drybrush of a 50/50 mix of Abaddon Black and Dawnstone for a base colour. Originally I had planned to layer it like I had done on the Custodian, but that quickly proved to be horribly inefficient. A series of drybrushes provided the same effect much more quickly. The Layer Painters' Union was deeply angered at this decision, but was appeased by the assurance that they would still get the glory of working on the outer rim areas. Once the basecoat was down the 'city bits' were highlighted using Dawnstone, followed by a final highlight of Administratum Grey on the exposed areas. Veteran members might recognise this as the same method written in the original 3rd edition [i]Codex: Tau[/i] for painting the dark mechanical areas of Battlesuits, which is where I got the idea from after noticing the similarities between that and the colours used for the mechanical areas on the Forgeworld demonstration image of the Custodian. Finally, the lights were picked out with White Scar and Evil Sunz Scarlet.

The outer rim areas were more experimental. I looked at several sources of inspiration for them, including the official ATT avatar artwork and the old forum colour scheme, but by far the main reference material I used was the old Thread Locked Mantas. After staring at them for some time and checking the Citadel colour range I worked out the best fits and some ideas of how to use them. I started on the lower concourse with a basecoat of Fenrisian Grey, followed by layers of drybrushing using a 50/50 mix of Fenrisian Grey and Celestra Grey and then highlighted with Celestra Grey. My original plan was to use blending to get a smooth transition between the colours so that the outside of the orbital would have a gradient effect, the required mastery of advanced Phased Blending technology proved to be beyond the grasp of my scientists at present, so I instead devised a solution using multiple successive drybrushes that I call a layered drybrush to achieve the effect. This process was repeated on the upper concourse, but using colours a tone lighter, so the basecoat was the same 50/50 Fenrisian Grey/Celestra Grey mix that was then given a layered drybrush of Celestra Grey and highlgihted with Ulthuan Grey. This was also done on the command deck, with a basecoat of Celestra Grey and a layered drybrush of Ulthuan Grey (also applied to the rim as edge highlights) and a final layered drybrush of a 50/50 mix of Ulthuan Grey and White Scar as a highlight on the apex. I was advised by Tael to look for a steely blue for the sept colour, and after cross-checking reference sources I decided the closest match was Thunderhawk Blue, which was used for the panel lines and sept markings. Once again, the lights were picked out with White Scar and Evil Sunz Scarlet.

I also documented the model itself, as part of my A-Z archive of Battlefleet Gothic models. If you were to order an Air Caste Orbital City from Forgeworld, this would have been what you got. 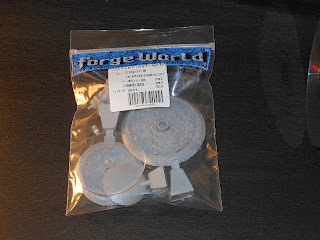 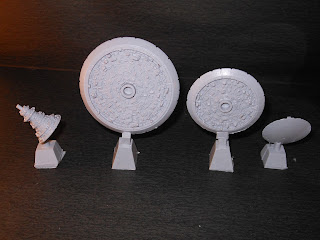 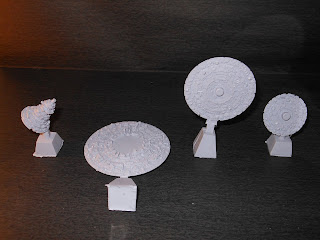 And the assembled model, ready for painting. 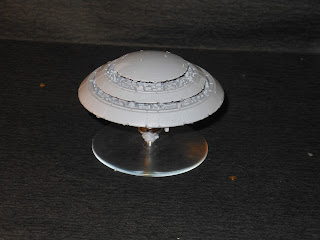 Welcome to the ATT Orbital 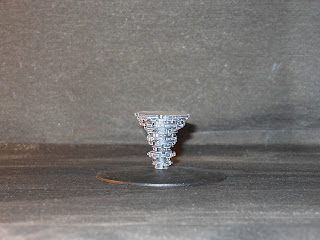 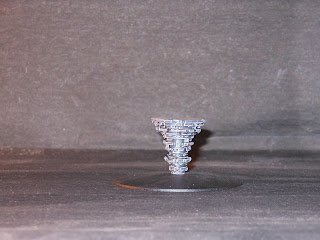 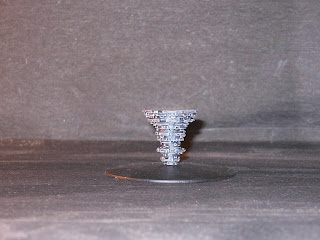 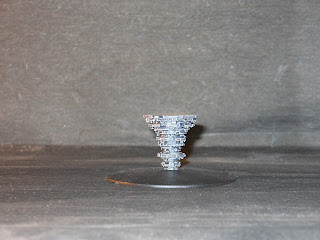 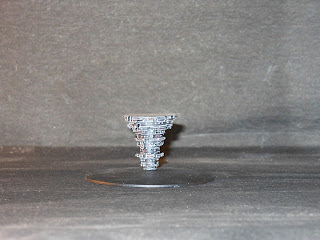 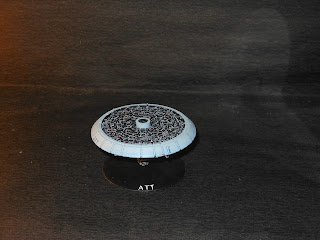 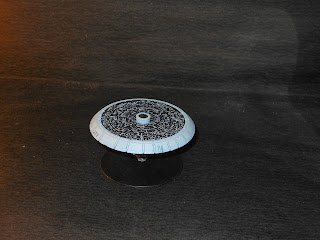 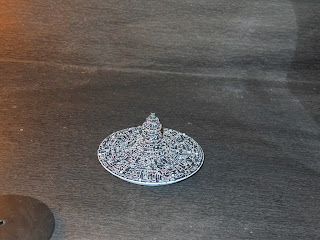 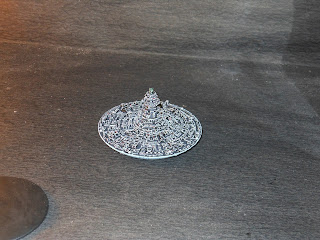 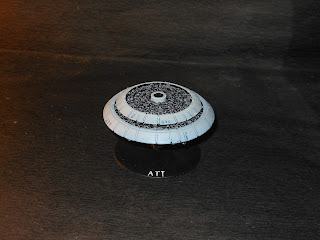 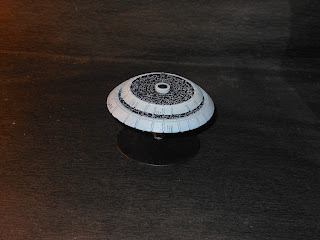 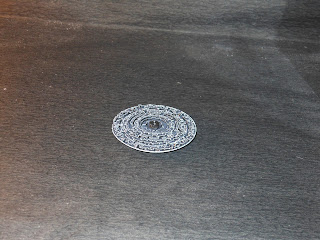 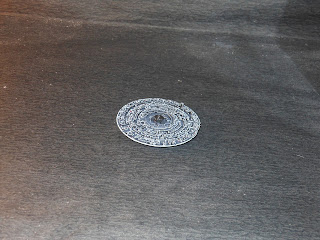 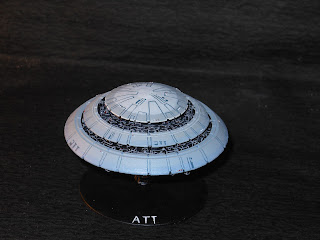 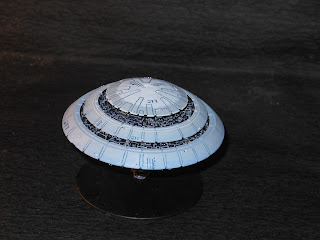 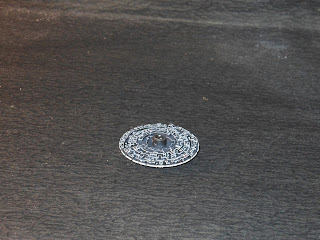 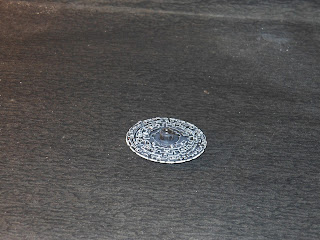 Not a bad grand finale for ATT's 10 year anniversary, if I might say so myself. Now then, time for a well-deserved break. There's still some Yuletide trifle left with my name on it...
Posted by MillitantGuerillaCommunistHippie at 03:45